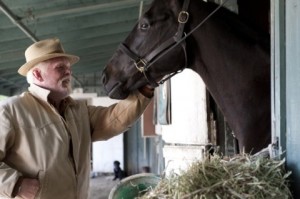 HBO has suspended filming on the second season of Luck, a horse racing drama starring Nick Nolte and Dustin Hoffman.  Earlier this year HBO took heat after two horses died in the filming of the first season.  Officials were on scene to monitor the treatment of the horses and the incident was classified as a tragic accident.

But now, one more horse has died of a traumatic head injury during the filming of Luck’s second season.  According to a report from Boston.com, the horse died on it’s way to the stall and had previously been cleared for use American Humane Association.  The horse was euthanized at the track in suburban Arcadia.

We’re saddened by the tragic deaths of these beautiful animals but are also concerned about the future of HBO’s new series, Luck.  Season 2 should continue filming soon after these incidents are fully investigated.  We hope officials can find a way to film these horses without endangering them.  HBO has said in the past that they are doing all they believe possible to ensure that this happens.  More when we get it.