With just two episodes left in HBO’s Lovecraft Country, the series continues to make the best of the source material.  At times, the show’s deviations from the Lovecraft Country novel are more intense and cathartic.   The eighth episode, “Jig-a-Bobo”, moves at a swift pace, yet it continues to develop our main characters.  “Jig-a-Bobo” is a take on the derogatory term “jig-a-boo” which was attributed by racists to black people and means those of lower class and intelligence.  Lovecraft County and most HBO series are the very inverse of lower intelligence. 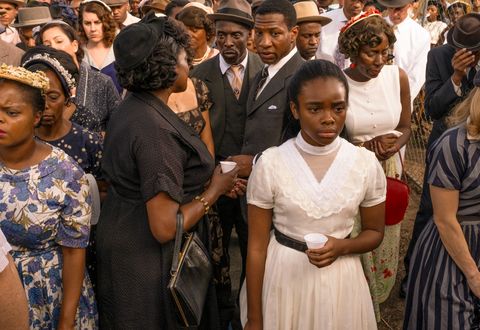 pening with the grimmest material yet, we see the funeral of Emmett Till.   Till was the catalyst for the 1954-1968 Civil Rights Movement, and his inclusion in this fantasy/drama series is not for mere shock value.  Lovecraft Country gives viewers a spectacle through its action sequences, but what propels the action and story is racism.   Other fantasy and science fiction stories are propelled by a “MacGuffin” which is a plot device such as The Ark of The Covenant or Holy Grail that our heroes are after to prevent world destruction.  Lovecraft Country’s Macguffin is the inescapable reality that Atticus, Leti, and Montrose must battle: supernatural opposition and the tangible opposition of a Jim Crow society.  The Emmett Till funeral causes many white citizens to be on edge, expecting a retaliatory attack from the black community.

Ruby, in her “white skin” form, makes love to William, who we know now is actually Christina.  Back in her ebony skin, Ruby chastises Christina for not have any sympathy for how she feels as a black woman.  Christina makes a fine villain, for her character is beautifully written and acted by a capable actress.  However, the most terrifying aspect is that Christian is brutally honest.  She tells Ruby point blank that she does not care about Emmett Till, and even gets Ruby to silently admit that she doesn’t either.  Ruby dons the white skin to escape society and forget about her woes as a 1950s black woman.  In a touching but terrifying turn, Christina hires two men to beat, shoot, wrap in barbed wire, and drown her in shallow water. She has now experienced the same atrocities that killed the 14-year-old Emmett Till.  Christina immediately arises from the dead due to her supernatural abilities, but she cannot shake what she has felt mentally.

Ji-Ah pays an unexpected visit to Atticus, upsetting Leti because he made no mention of his love affair and (more importantly) his near-deadly encounter with her eight tailed fox curse.   This is one scene that I wanted to be fleshed out more, but I suspect the writers are going to expound upon Ji-Ah’s presence in America in the very near future.

Those that have seen “Jig-a-BoBo”, may ask:  Why is there no mention of the titular characters?  For the jig-a-boos are a curse that magic-endowed cops have placed on Hippolyta and the late George’s daughter Jada.  Jada is in a mental but very tangible battle with two heavily deformed dancing girls.  This is dispersed throughout the episode and is part of the cliffhanger upon the episode’s conclusion.  The other cliffhanger being the aftermath of the bloodbath encounter of the police, Atticus & Ruby, and one of the monsters seen in the pilot episode.  Let’s just say that the score is 1-0 for the monster, with it seemingly on our protagonist’s side.

With only two episodes left, what are you hoping to see? Check out the promo for Episode 9 before you go: