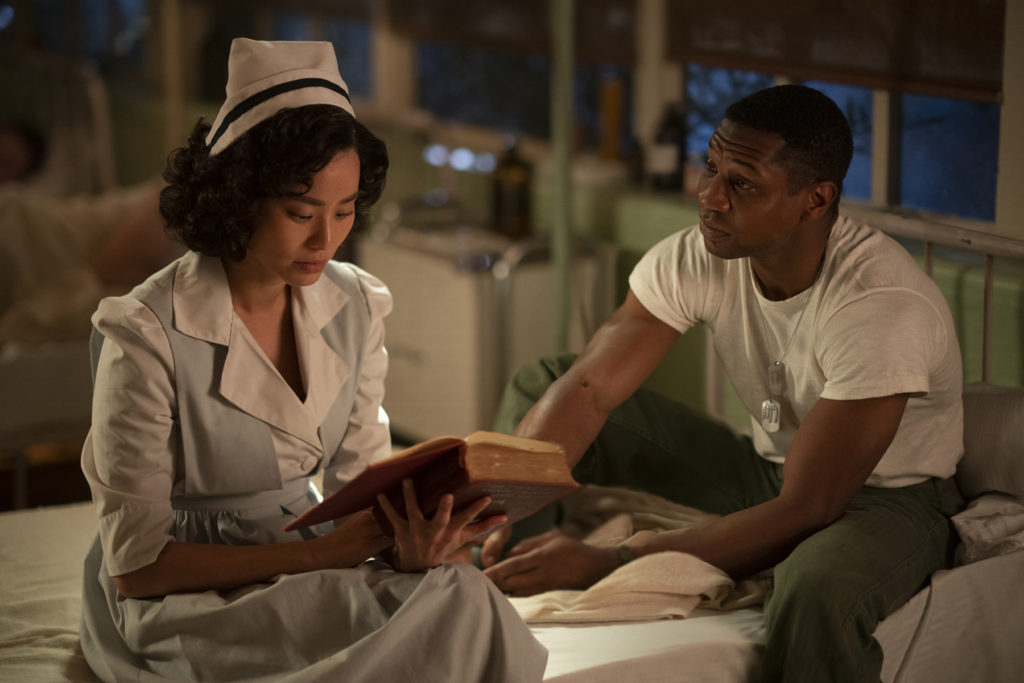 HBO’s latest Sunday at 9 pm guilty pleasure crosses the midpoint of its first season with the remarkable “Meet Me in Daegu”.  Akin to the previous episode, “Meet Me in Daegu” takes a divergence from the main characters, this time to introduce us to Ji-Ah.  Ji-Ah is a nurse in Daegu, South Korea, and is an aficionado of Western musicals.  She is particularly drawn to Judy Garland films and has a fantasy of performing Garland’s “The Trolley Song” in this episode’s opening scene.  The sequence is visceral and engaging, recalling the dream sequences that Atticus had in previous episodes.  There is something ‘off’ about Ji-Ah.  Really off.  An awkward speed dating event tricks us into thinking that the pretty but self-conscious Ji-Ah is simply socially awkward.  However, there is something much more sinister buried deep inside of Ji-Ah. 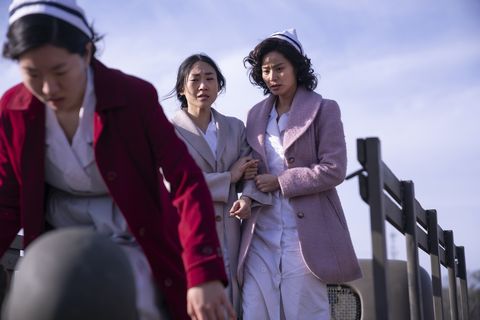 As the months transpire in “Meet Me in Daegu,” HBO and the showrunners introduce (reintroduce for history buffs) the atrocities of The Korean War.  This war was given the secondary moniker “The Forgotten War,” for the 1950-1953 conflict took place between World War II and The Vietnam War.  Having less history books and documentaries made than other global conflicts does not make The Korean War any less horrifying.  In one scene, Ji-Ah and her shift of nurses are taken to a U.S outpost and interrogated for being in suspicion of supporting the communist North Korea (which was not officially North Korea until the war’s conclusion). One of Ji-Ah’s co-workers says that she is the spy, after two other nurses were executed.  The confessed spy is taken away for more inhumane acts and it is revealed that one of the executed nurses was Ji-Ah’s close friend.  This friend was shot point blank by none other than Atticus Black.

War causes the most passive people to take part in the most heinous and aggressive acts.   Our main protagonist has demonstrated that he is capable of committing acts analogous to the most despicable antagonists.  Is the fact that Atticus, a mere private in the U.S Army, was following orders? Does this taint our perception of him?  Well, the brilliance of Lovecraft Country is that is left up for the viewers to decide.  On one afternoon, an onslaught of wounded American GIs are sent to Ji-Ah’s hospital.  One of the wounded is Atticus, and Ji-Ah understandably harbors animosity towards him.  Atticus’s glasses are broken, and he asks Ji-Ah to read “The Count of Monte Cristo.”  Ji-Ah attempts to ruin the ending for him, but Atticus reveals her spoilers came from the movie, and not the book.  This could be foreshadowing that either Atticus’s fate is going to be different than the Lovecraft Country book, or his fate could be different than what Ji-Ah has seen.

And what has Ji-Ah seen?  Ji-Ah is possessed by a spirit known as a kumiho, a nine tail fox that sucks the souls out of seduced men. The kumiho also bestows its host with the ability to see into the past and would be future of its victims.  Ji-Ah’s mother made a deal with a witch at Ji-Ah’s birth, and Ji-Ah is to collect 100 souls for the curse to be reversed.  Ji-Ah and Atticus bond over the notion of war causing sane people to commit insane acts.  Atticus even manages to get a 35mm print of a Judy Garland film for Ji-Ah to view in private with him.  This unlikely but believable romance gets to the point of commensuration, where Atticus reveals that he is a virgin.  This may have saved his life, for although Ji-Ah is truly in love with him, she at times cannot control the kumiho.   When the two lovers finally become intimate Ji-Ah sees a disturbing vision:  Atticus will die a slow painful death in the future.  Ji-Ah tells Atticus to run as she suppresses the kumiho.

HBO’s Lovecraft Country is superior to its outstanding source material because it honors the book while putting the characters in outrageous but intelligent storylines.  Ji-Ah’s presence brings forth many questions.  Will Ji-Ah’s vision come to past?  Can the future be changed?   Will her unwanted abilities help or hinder Atticus?  Is Atticus’s love greater for Ji-Ah or Leti?

Return to HBO at 9pm on Sunday to find out.