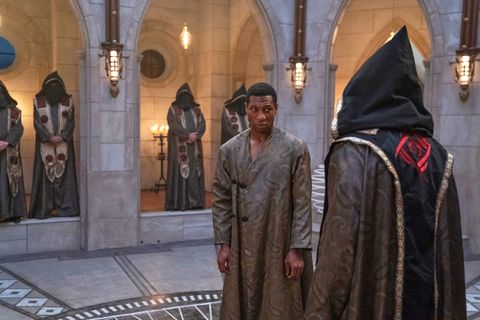 The triumvirate of Misha Green, Jordan Peele, and JJ Abrams has thus far been an effective collaboration.  The former two talents are no strangers to transcending social issues through adventurous storytelling with black actors and actresses in prominent roles.  It is quite easy to jump on the progressive express and make ham-fisted television series just to check off the diversity box.  HBO’s Lovecraft Country gives us action, adventure, mystery, and horror with a predominantly black cast whose characters will be likable for any viewer. 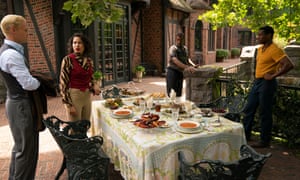 The second episode, “Whitey’s on the Moon,” opens with the iconic 1970’s theme song “Movin’ On Up”.  Leti and George are ecstatic about their living accommodations, provided by their eerie hosts, the Braithwhites.  The gleeful Leti has fashionable clothes that fit perfectly in her room’s closet. George’s room features a built-in bookshelf filled with his favorite literature.  Atticus is much less enthused.  He is simultaneously perplexed and vexed that Leti and George have forgotten the gruesome events of the previous night.   Furthermore, Atticus warns that their hosts are attempting to make them comfortable, so they will not leave.  Ever heard the phrase ‘unwanted house guests’?  With Lovecraft Country, it turns out the majority of the hosts are unwanted by our protagonists.

Although Leti and George are having a strange case of event-specific amnesia, they have not forgotten why they have traveled to this strange land.  They must find Atticus’s father Montrose.  As they roam about the vast Braithwhite estate, Attius hears the high-pitched whistle that recalled the creatures in the previous episode.  When tracking down the source of the whistle, the trio is un-cordially introduced to Dell, the groundskeeper.  Dell is a composite character, that is meant to represent the prejudices of society.  Her personality perpetuates stereotypes. In one scene she says black bears (which are in actuality black people) are “smart, but not as smart as they think, and troublesome.”

Samuel Braithwhite is the leader of a cult called “Sons of Adam”.  He views all people, including his daughter as inferiors.  Braithwhite is so crass that even though the KKK shares his superiority complex, he views the supremacist group as poor degenerates.  Samuel reveals that Atticus was lured to the estate because he is a direct descendant of a powerful sorcerer, and his blood is needed to complete a ritual that will grant Samuel infinite power.  Without spoiling the episode, I must voice my appreciation of the HBO team and source material author’s astuteness to avoid going into the realm of the “magic negro”. For those that are not familiar with this concept, in layman’s terms, the magic negro is a character that possesses a supernatural gift but is too dimwitted to help themselves or their own people with said ability. The magic negro only uses the power to assist white people.  Lovecraft Country side-steps this dumpster fire of a trope with characters that are of equal or greater intellect to the status quo. Let’s just say that things do not go exactly as planned for good ol’ boy Samuel.

The source material is well-written and paced, and I was able to read it within three days.  However, HBO’s take moves along exponentially faster without skimming over details.  This episode makes it apparent that the series will make its own storylines, especially with the shocking death that occurs in “Whitey’s on the Moon”, a death that does not happen in the novel.  The episode title is inspired by the song of the same name, which criticized the Apollo Moon missions because the American Government had sociological issues on terra firma, yet was placing men on a giant grey rock.  Here, the voices of the once unheard are being heard through our central characters.  Sidebar: For the record, I am for space exploration, but the point is there, nevertheless.

Lovecraft Country returns with a new episode of terror and adventure next Sunday in the premium cable coveted 9 pm time slot.

Check out the teaser for next week’s episode before you go: