The HBO publicity engine usually runs in a certain manner regardless of what the title is. You get the key art, which is the poster, then you get carefully crafted snippets of footage via a Teaser before you get a full Trailer which tacks a good minute or so to a Teaser. The Teaser, at times, is the clip that issues the premiere date if one is known and doesn’t always have the officially scored music for the content, but it does give eager fans a glimpse at what is ahead. You always hold out for the Trailer because it packs the most detail, a Teaser, can be hit or miss; it isn’t always that big a deal. But from time to time a great one drops. WATCHMEN had a great one and this writer claims that the one for the upcoming LOVECRAFT COUNTRY is another one of the same ilk. You can watch it again or for the first time below:

We haven’t had a real strong description of the series, thus making it more suspenseful for us, but this video clip really accents the tone and feel of the whole story. The series follows Atticus Freeman (Jonathan Majors) as he joins up with his friend Letitia (Jurnee Smollett-Bell) and his Uncle George (Courtney B. Vance) to embark on a road trip across 1950s Jim Crow America in search of his missing father (Michael Kenneth Williams). This begins a struggle to survive and overcome both the racist terrors of white America and 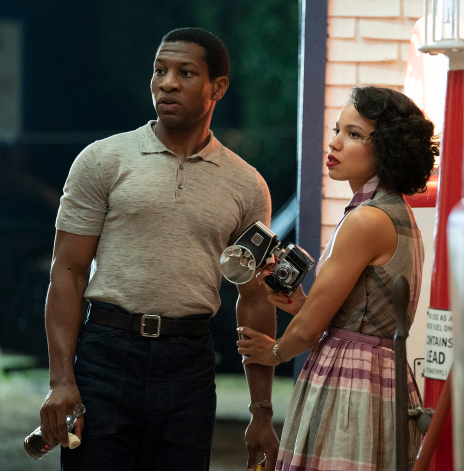 the terrifying monsters that could be ripped from an H. P. Lovecraft paperback.

I don’t know about anyone else, but hearing Jonathan Majors (Hostiles, When We Rise) here, well, I could listen to his story all day. He delivers his lines in this Teaser just right. I can’t explain it but he just does. And from all the imagery flying about. From bodies dragged into the water, imploding buildings and such, he has quite a story to tell. We get a strong sense of the racial tensions of the day and the added bonus of equally strong horror elements to boot. It all leads one to wonder, which big evil is worse?

We will find out the answer to that come August when LOVECRAFT COUNTRY debuts. We will announce the specific debut date when we know it and get a gander at the Trailer when it appears. Do you have an interest in LOVECRAFT COUNTRY? Let us know below.