Filling a Friday night niche comes a quirky yet fun enough series (if one episode can be the judge) the likes of which hasn’t been seen on HBO. It is LOS ESPOOKYS. It is a mash-up of horror (though not scary at all) and comedy done Latino style from the minds of Fred Armisen, Ana Fabrega, and Julio Torres.

The main crux here is the jobs a team of horror stagecraft enthusiasts manages to get staging horror experiences for their clients. The first episode, for example, has them staging a fake exorcism. To head the team is horror fan Renaldo ((Bernardo Velasco). We learn of his penchant for the gory by seeing him pull off a surprise for his sister’s Quinceanera party. From that, the idea is born to turn such theatrics into a business. He gathers three friends to help him, Andrés (Julio Torres), Úrsula (Cassandra Ciangherotti) and Tati (Ana Fabrega). Though these characters are not fleshed out to any great detail they are an odd team for sure. Renaldo is the businessman of the newly formed group; Ursula is there to handle the logistics of any task with her feisty flair, Tati, is called the ‘test dummy’ or the live component in the staged craft designed and Andres is there just to cast a weird vibe on it all. And they all perform their duties quite well. They are into this and Armisen is also in as recurring character Uncle Tico to help spice up a scene or two. 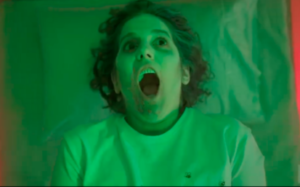 Their first case is an exorcism. After a meeting with Father Francesco (Luis Gnecco), the group agrees to orchestrate a staged exorcism that will elevate Francesco above the hot new priest who’s usurped the spotlight. Francesco can’t have that and playing along to save Tati, the demonically possessed, is going to solve the problem nicely. So, complete with levitation the team satisfies their client and Los Espookys is born.

LOS ESPOOKYS is a six-episode run Friday nights at 11:00pm. Again, it is a quirky fit but one that a late-night audience might have a bit of fun with. The show is in Spanish and thus is subtitled but just because of that it doesn’t need regulated to HBO LATINO. Perhaps Armisen’s involvement (as Stateside’s most recognizable face here) sealed the deal. Or perhaps HBO wants to branch out into more foreign language fare on the main channel?  Either way, HBO has given us the off-beat LOS ESPOOKYS to amuse us. Will you be watching?