In this one, Renaldo comes up with a solid business plan to seek out clients who just might need their services as opposed to sitting around waiting for a call and taking the task. Besides, who knows what perverts just might call for help, as was the case with an early scene of this episode. So, from the newspaper, Renaldo learns of Mayor Teresa Lobos’ concern for a lack of tourism in her beachside town.  He meets with her and a plan is hatched. They are going to create a sea monster to attract the tourist trade in seeking it out. Of course, Tati is the one thrown overboard in a seas monster getup. The gig works and it ends up a steady income for the Espookys team as the monster will make an appearance monthly to keep tourism alive.

Finally, we start to get a bit of a back story to some of our players intermixed with the horror gig at hand. We’ve had moments but they start to really coalesce in this episode. Andres is still an odd sort (he is mystical or is that magical?) but we do learn that his boyfriend Juan Carlos is out to be rich as he proposes marriage 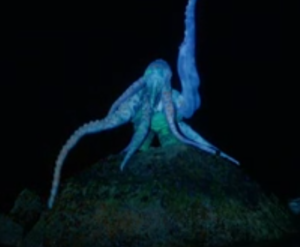 to his chocolate prince; Tati is in love with some imaginary Prince & taking it quite seriously; Beatriz (Renaldo’s sister) is caught up in a pyramid scheme which Ursula points out is bad due to past experience and Renaldo’s bent for horror all stems from his mother misspelling his first name at birth. It all plays out much better than I’m describing it. However, even though the gig went well that is not the case for the personal life of the team. You can’t have everything.

Fred Armisen’s appearance ties into the scheme of things a bit better this time around too. He provides valet services up in LA to Renaldo’s favorite horror director Bianco Nova. She is played by the spaced out Carol Kane. Is there an outside chance Uncle Tito can arrange for Espookys to do the FX for a movie?