Hey, there is no trailer yet but there is a premiere date for Fred Armisen’s LOS ESPOOKYS. It is coming in June, June 14 in fact. Below is the official press release regarding. 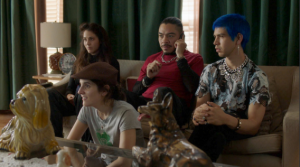 Now, all we need to get in the mood for this one is at least a couple of pics, instead of the same one reused or better yet we need a trailer to set up the series. But I am wondering why they shuttled this series to Friday late night. They are expanding to Monday nights but this one doesn’t make the cut?  Maybe, LOS ESPOOKYS may be considered an experimental series? To use the release’s language the show is a ‘Spanish-language show.’ It is not a show, however, regulated to HBO Latino but the main HBO channel, so perhaps it is an experiment to see if the main channel can draw Spanish-language programming. Hey, I say there is always closed captioning if you aren’t bilingual. Are you ready for more LOS ESPOOKYS?