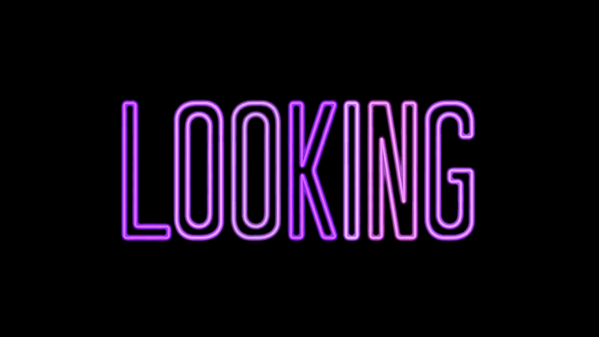 This past Sunday (01.11.15) marked the return of three boys from San Fran, struggling to keep their lives together amidst the chaos of their own discontent. Looking kicked off its second season with a lively and dream-like premiere episode, as Patrick, Dom, and Agustin headed to the woods for a quiet getaway turned LGBT midnight rave filled with sex, drugs, dancing, and skinny-dipping.

Pat tries his hardest to refrain from wallowing in his own misery for how badly he handled his situation with Richie, who he’s obviously still hung up on. And yet, the one person he can’t keep off his mind is Kevin, as we learn that their secret relationship has developed since we saw them last. This is obviously an issue for Pat, considering Kevin still has a boyfriend. Agustin seemed to have gone off the deep end for a while after his break-up with Frank, accusing Pat and Dom of their getaway being a staged intervention after Pat suggests a weekend of sobriety. However, according to Pat, the weekend is solely meant to be a getaway for the three to spend time together, although secretly, he hopes for this weekend to signify the cutting of his ties with Kevin. It’s not long before Doris, as hilarious and outspoken as ever, arrives and turns their “calm weekend” on its head, as the four take Ecstasy and head to “The Promised Land,” a rave in the middle of the woods. 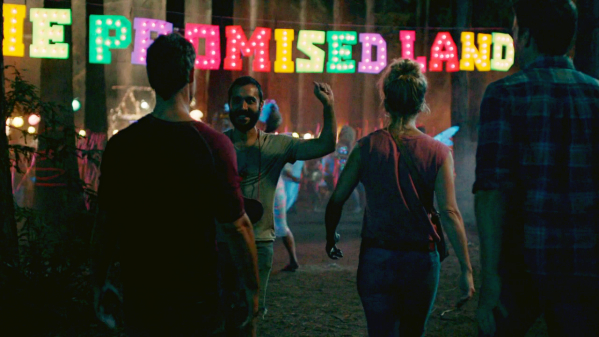 “Looking for the Promised Land” is easily Looking’s most fun, vibrant, and gorgeously artistic episode to date, particularly during one continuous long-shot where we go from character to character as each takes in the party on their own, dancing with strangers among the electro-pop and neon lights. Everyone is lost in the moment, and it’s impossible to not get lost with them. Their lives in San Francisco seem eons away—that is, until Patrick gives in and calls Kevin to join the party. Cutting ties with him is easier said than done, in Pat’s case.

The other boys aren’t far behind in finding partners for the night. Dom explores the “openness” of his relationship with Lynn—who we learn is now his boyfriend—by hooking up with a stranger, while Agustin goes skinny-dipping with a new friend named Eddie, played by Daniel Franzese—a familiar face for any Mean Girls fan. Eddie is the first new face of the series and possibly the most important, as Agustin later discloses that Eddie is HIV positive. This is new territory for Looking and is likely to be a vital topic this season as it progresses. 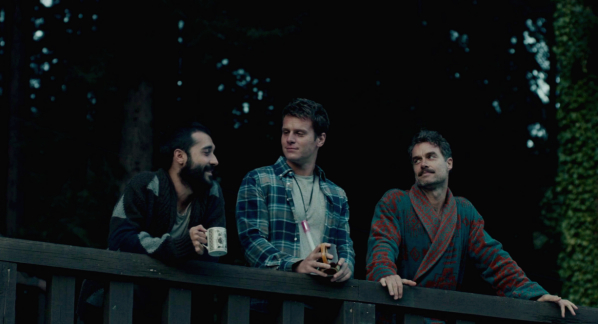 As dreamy and enjoyable as Looking’s season two premiere episode is, it continuously holds an underlying sense of self-imposed escape. Every character has their demons to battle back in the real world, and it will undoubtedly be interesting to see how they develop or deal with them. Patrick is clearly ashamed of how he’s handing his situation with Kevin, or lack thereof, not to mention how much he still cares for Richie. Agustin’s troubling drug habits are inferred, but not entirely depicted, due to his post-breakup instability, so this could be an issue for him as season continues. Hopefully his newfound friendship with Eddie brings him some mental clarity. Dom seems to be the most well put-together of the bunch, but we have much to learn about his relationship with Lynn and how exactly its “openness” will play out. And, of course, let’s hope Doris will continue to be around to provide the funniest quips in every episode, well aware she is only straight character in the series. “Hanging out with you bunch—not the best for my vagina,” she laughs, but it’s doubtful that’s going to keep her away from her favorite trio.