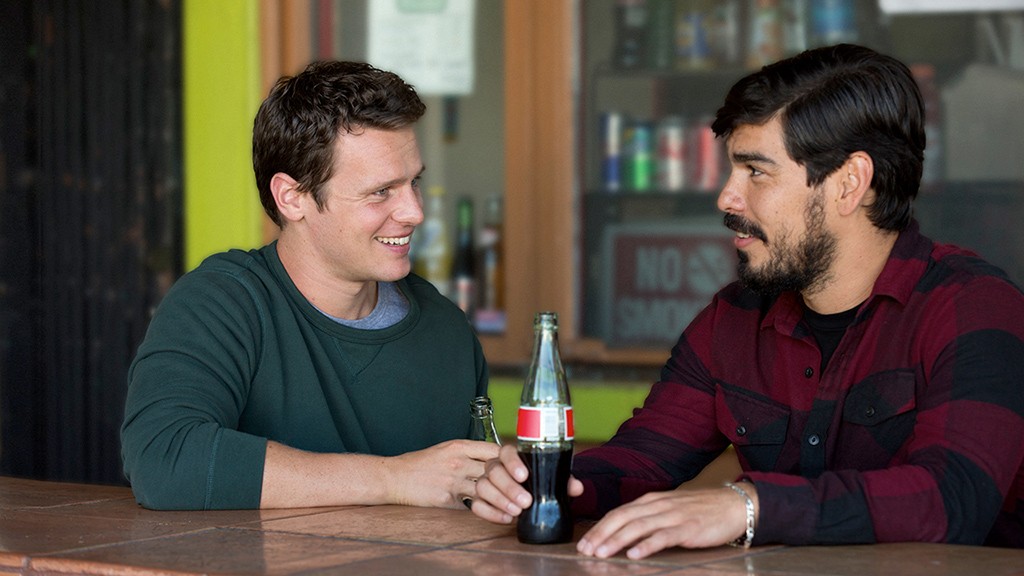 We find our reluctant single guys, Patrick and Agustin, wandering around, looking for love (in all the wrong places). Clearly uncomfortable at a staff party, Patrick leaves early, only to be stopped by Kevin. After some pretty terse words, Patrick stands his ground, puts Kevin in his place and leaves without a backwards glance.

You can tell Patrick is lonely, bored and sexually frustrated. He ended the clandestine relationship with Kevin and although it hurt, it was for the best. Like he said, there’s no more lying and no more sneaking around. That’s not to say that it doesn’t hurt. Or that old feelings resurface, especially when he glances on Facebook and takes a peek on his former boyfriend’s profile page, Richie. Ah, the one that got away.

Well, fate intervenes. Sort of. Richie needs someone with a truck to help him out. Three guesses as to what Patrick does, once reading that status. Agustin cautiously approaches Patrick’s room and asks what he’s up to. Agustin warns Patrick about not getting involved again with Richie as a rebound thing or as a means of temporary revenge on Kevin. As much a Patrick tries to plead and rationalize with Agustin that he’s ‘just doing a favor,’ – the audience knows that Patrick is in a bad state and is still nursing a broken heart over Richie. 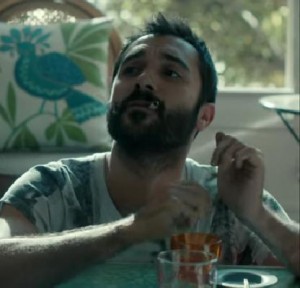 We don’t see any Doris or Dom in this episode, but we do see Agustin trying to get his funk on with his friend. He ventures on down to his friend’s apartment and spends some time. But, knowing just how charming Agustin can be, the fact that he brought over soup is just an excuse to put the moves on Eddie. Sure enough, after dancing and being silly, Agustin put the moves on Eddie and is at first, rejected. What a blow to his ego. In a way, it serves him right. Some men can’t stand to be rejected. Well, deal with it. Maybe sometimes, a person needs to hear the cold, hard truth, in order to keep their ego in check. Shortly after, Eddie makes it clear that they are not a couple, but just two people fooling around, out for a good time. I don’t know….I think Agustin is going to get hurt but hey, that’s part of being in a relationship. Sometimes they work out, other times, not so much.

Meanwhile, back at the office, Kevin is brooding. He’s just sitting at his desk, glancing at a deck of cards (this one having special meaning, as this is the one he showed to Patrick a few episodes earlier) and picks up his phone. Kevin calls his boyfriend and here’s another situation wherein the truth will come out, possibly with bad results, but maybe Kevin feels that this is the right thing to do, either to clear his conscience or maybe as a move to get Patrick back. Who knows how this will turn out?

Richie and Patrick are in Richie’s old neighborhood, going to get the truck – an ice cream truck that will be sold– while strolling through the area. They go and get something to eat and the conversation steers towards relationships and breakups. I like Richie; he’s hard working and honest. I also find him very attractive and feel that Patrick treated him terribly. Richie is now with someone else (Brady) and he is happy.

Patrick comes clean and confesses to Richie that he was scared and confused, that he hooked up with Kevin and how he absolutely hated the person he became while involved with Kevin. Richie agrees, but he is happy that Patrick is feeling better and the two go to the auto mechanic shop to meet his cousin, Ceci (not sure if I am spelling her name right). Ceci doesn’t believe in holding back and makes all sorts of remarks, bordering on racist ones and literally grills Patrick. Funny enough, she’ 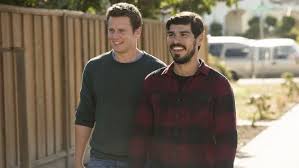 s actually on Patrick’s side, stating that she had never seen her cousin so happy. However, Richie’s relationship with his father is quite fragmented and doesn’t appear to be getting any better as time moves on.

An encounter with a family friend at the car wash turns tense. Richie tells the guy to take a hike (I’m being polite, but Richie used stronger language). I guess Richie is still quite upset about the fact that his father is not speaking to him. It must be hard for some people, in this day and age, to accept that their son or daughter is gay. It could also be a cultural thing but we are only given hints towards the end of the episode that Richie and his dad have a very complicated relationship.

Speaking of relationships, Patrick bares his soul to Richie about missing him, while driving the ice cream truck in the neighbourhood. Some kids stop and inquire about wanting some ice cream cones, only to be told to go away by Richie, who is upset about all that went down between him and Patrick. In the end, Richie is a gentleman and says that he is happy with Brady and would still like to be friends with Patrick, but only friends. Patrick is happy to be friends, than to be nothing at all.

Take a moment and go inside the episode.

We leave you with a preview of episode # 6.