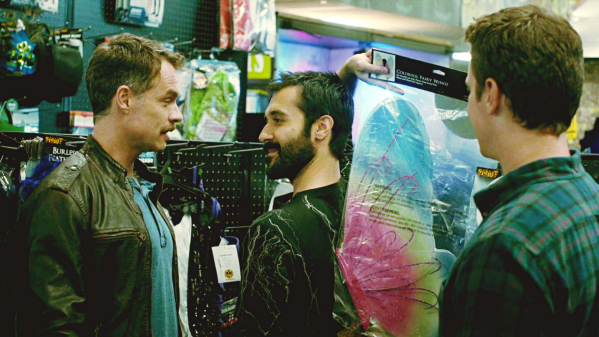 Happy Halloween from Looking this past Sunday! This particular episode took us on a witty and colorful trip through Patrick and Agustin’s Halloween party, and also functioned as a character study on Patrick and the wholly distraught nature of his emotional sanity. The series has followed him roaming through life with his mind constantly on one of two boys—Richie and Kevin—and the tension between these two tightened highly in “Looking for Gordon Freeman.”

The episode stars off with the trio contemplating costumes in a Halloween store, where Agustin decides to go with a fairy costume, complete with wings and glitter. They’re all planning for their Halloween party that evening, discussing their Facebook event, e-vites, karaoke, and the like. When collecting leftover Halloween candy from his company’s party, Patrick sees Kevin in his office and finally speaks to him after having avoided him for some period of time. Kevin tells him he’s planning on returning to Seattle because it would be easier for him, given Pat’s distance. It soon becomes obvious that Pat’s feelings for Kevin are not as cut off as he’s played them off to be. Still, Patrick is determined to be a “fun gay” this Halloween and ignores Kevin’s comment, dressing as an obscure video game character named “Gordon Freeman,” which Agustin calls “a mailman from the future” and Doris calls “the gay Walter White.” The episode feels like it’s finally giving us some breathing room after Patrick’s tumultuous, emotionally-fueled relationships with Richie and Kevin. That is, until it throws you into the boiling pot of it all featuring Patrick having an emotional breakdown. 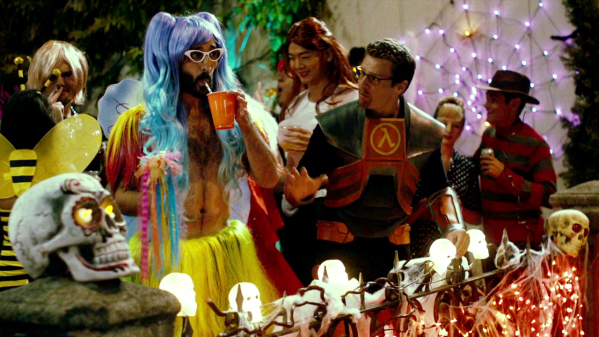 The party begins and everyone mingles freely, with costumes varying from Bilbo Baggins to Maleficent to Max from “Where the Wild Things Are.” It’s refreshing to see everyone finally cut loose for a bit. Patrick is the only edgy and unhappy one, trying to hide his anxiety as Richie and his date arrive. Pat has really tried getting Richie to trust him again, and it almost feels like manipulation at this point. In what is easily the best line of the episode, Richie tells Patrick, “He’s way more fun than you,” leaving Patrick totally thrown off.

Patrick, as the main character, feels like who we should be rooting for in Looking, but it’s still fun seeing him fall on his feet—which has practically been the entire series. It almost feels like what he deserves for being so selfish. His night continues as he contributes to a discussion with Richie’s new boyfriend, Brady, about an article he wrote about the possibility of taking PReP, a drug which can avoid the contraction of the HIV virus. Patrick’s arguments about sexual freedom and AIDS fall apart, leaving him more of a distraught mess than he previously was, and his night becomes a descent into alcohol and misery. Right on cue, Kevin arrives with his boyfriend to the party. This is clearly not Pat’s night.

Patrick’s crazed, drunken antics lead to his party speech, where he manages to raise money for Dom’s “chicken window,” discloses Agustin’s private life with drugs, and yells out that Richie is now with “his soulmate” before being forced off the microphone by Agustin and Dom. Pat ends up sitting alone outside where he is followed by Kevin, and the two rehash the feeling they’ve been suppressing about each other. Kevin moving to Seattle is official, and Patrick spouts the expected, “I’d miss you too much if you go,” eventually proceeded by, “I hope everything works out the way you want” in front of his boyfriend. Patrick is an unbearable character at times like these because it seems that he doesn’t mind complicating situations, precisely as he has done now as Kevin’s boyfriend begins raising suspicious questions. An exhausted and distraught Patrick is eventually left lying on a bed as he smiles at Richie, who goes off to dance with his boyfriend, Brady. 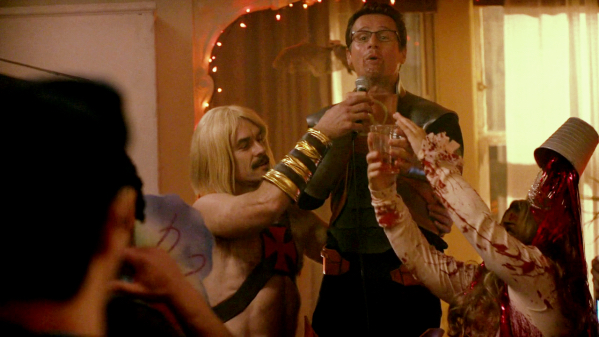 “Looking for Gordon Freeman” had a similar party night vibe to the season two premiere, but with all of the Patrick’s new emotional problems completely hoarding him half a season in. He comes off as innocent and charming, but we’ve come to see that he usually has ulterior motives and can be manipulative. He still wants both Richie and Kevin, and despite what he may say about these relationships being over, his reasoning and actions on the show—with this episode in particular—add an entire layer of desperation and clinginess to his character. In many ways, the episode was a journey through Patrick’s reasoning and watching him crash and burn. The episode title suggests that we’re trying to see beyond the layer or “mask” of optimism Patrick has to put on in front of everyone, ironically on the night he has to wear a costume, and this is something he does not do well. In essence, the episode theme itself suggests we are looking beyond the facade Patrick puts on as we actually see into his mental and emotional sanity. He is anxiety-ridden and makes a total embarrassment of himself, which doesn’t come off as much of a shock given how much he’s had to repress. Still, his cunning and selfish nature makes him difficult to empathize with.

Agustin and Dom are the best put-together of the bunch, and to contrast how the trio’s friendship has evolved, Patrick is the one making a disaster of himself rather than Agustin. Agustin continues to seduce Eddie and their relationship is flourishing with poignancy, and the two enjoy the party (before Pat’s emotional breakdown) while Dom roams as He-Man and Doris and Malik as Sonny and Cher—with alternated gender costumes, of course. From here on out, Looking will definitely need to focus on Patrick’s obscured thinking, because he is coming off as a frantic, egotistical mess. Everyone else will likely provide the hilarity while we put up with Pat for a while.

Here’s a look inside episode 6 followed by a preview for episode 7 which will air on Sunday, 3.1.15: