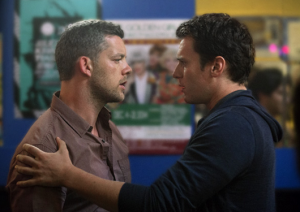 “How do you feel about going back to John after we’re together?”

This man is only going to break his heart. I swear, it’s so obvious and it’s like watching a car crash. I know what’s going to happen but can’t bring myself to look away no matter how painful I know it’s going to be. I knew almost immediately when I started this episode how it was going to end.

One of the things I love the most about this show is probably the fact that the characters are so unbelievably relatable. Patrick discussing his past as “Fat-rick” and his worries about eating unhealthy food was such a resonating scene for me. The writers of this show have such an amazing ability to give us short scenes, barely a few minutes long, that show us so deep inside the character’s actual person. It’s an amazing thing to be able to illustrate such a deep complexity with just a few short phrases.

I know this might seem a bit far-fetched but can we just talk about how Patrick doesn’t second guess getting ice cream (a traditionally junky food) with Richie when he was agonizing about eating unhealthy food with Kevin just hours earlier? I’m placing my money on that having some kind of actual significance because we all know how anti-Kevin I am at this point.

“You a home-wrecker now, Patrick?”

Oh hi, Richie, you’ve been back for a minute and I already love you again. No one else seems to call Patrick out on the fact that he’s doing something wrong, and pretty much setting himself up for heartbreak, but Richie didn’t hesitate to let him know that this isn’t okay. As much as I doubt Patrick is actually going to listen to it, it was still nice to have someone actually call him out.

“Is that the boyfriend?”

And with that one four word sentence, we experienced the start of Patrick’s realization that this isn’t his smartest plan. It’s the old wive’s tale of a mistress believing that his or her lover is going to leave their spouse for them and finding out that they never had any intention of doing that later down the line. Kevin will just continue to ply him with false promises, swearing up and down that he’s just as invested as Patrick is, drawing him further in until there’s no hope for escape.

For an outsider, it’s almost painful to watch.

Speaking of painful scenes, the ones between Lynn and Dom this episode killed me. Dom is so anti-commitment and here he is laying it all out on the line, hoping to build a life with someone and Lynn is still so trapped in his own grief and loss that he won’t even consider it. It became so obvious that there’s no moving forward for the couple, when they want such different things and my heart broke a little.

The episode ending was perfect. Watching Patrick walking out on Kevin, strolling down the street all by himself, was a jarring scene switch from the crowded club. The cinematography in that one scene was probably my favorite throughout the entire episode.

“Looking Down the Road” symbolizes so many different things for this episode. It’s all about thinking about the future and trying to figure out life and what these guys are going to do. For Augustin , it’s trying to find a job that he doesn’t hate. For Patrick, it’s figuring out what is going to happen with Kevin and if it’s worth the risk. Dom is trying to decipher exactly what’s happening with him and Lynn and dealing with a broken heart for the first time in his life.

I’m pretty sure everyone watching has been through at least one of these situations in a past relationship which ties back to my belief that these writers are brilliant when it comes to creating real characters in real situations. Each episode continues to build these amazing stories that I can’t help but get sucked into.

Also, take a look at the preview for next weeks episode “Looking For the Truth.”