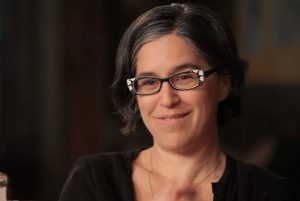 WATCHMAN is slowly moving forward or at least slow enough for the eager fans of Alan Moore and Dave Gibbons’ satirical take on the whole superhero thing. The latest news is that executive producer and showrunner Damon Lindelof has chosen a working partner in Nicole Kassell to bring his next HBO series to life.

Nicole Kassel will take the helm as director of the pilot episode of WATCHMEN as well as serve as an executive producer. If all goes well she will likely direct further installments going forward. Of course, Lindelof chose someone he has worked with before. Kassel. She directed two good episodes of THE LEFTOVERS. She called the shots for Season Two’s “No Room At The Inn” featuring Rev. Matt & Mary Jamison and the Season Three episode “It’s a Matt, Matt, Matt, Matt World” which is the passenger ship episode. She also is no stranger to other HBO content; she directed “Cyclone” the fifth episode of VINYL.

The project, from Lindelof’s White Rabbit in association with Warner Bros. Television, also has received an order for backup scripts. If HBO is excited over the visual style created by Lindelof, Kessel and their crew in this pilot it can only mean good things for WATCHMEN. Keep in mind that the director of the 2009 movie, Zach Snyder, is not involved in this series. Though his work might serve as a visual tool for the series it does not necessarily need to do so out of a contractual agreement. So the series team could offer up a somewhat different look to the content than we’ve seen in the movie. The series is also likely to start back at the origins story of The Comedians and the others. We will have to wait and see. So next, we just might hear about casting. Stay close and we will announce it when we see it.