We know so very little about John Oliver’s HBO show, but we thought we’d better give you what we can when we can. Though we know his style of work via Comedy Central’s The Daily Show we don’t know exactly how LAST WEEK TONIGHT WITH JOHN OLIVER will be formatted, how many guests per show or even what kind of set it will be. All of that won’t be revealed until Sunday, April, 27 at 11:00pm. But we do know who is being interviewed in that premiere episode. 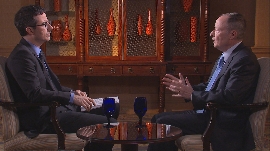 of the topical half-hour comedy series features the first interview with Gen. Keith Alexander (pictured with Oliver) since he retired as director of the National Security Agency and head of U.S. Cyber Command. Sorry, that is all the information we havet. Well, I guess we can say that the show will feature weekly a one-on-one interview with someone in the news. That should be no surprise though, as John
Oliver’s style of satiric wit is similar to that of Jon Stewart’ and Bill Maher.

As a reminder exactly what the show is about here are words straight from an HBO Press Release:

>LAST WEEK TONIGHT WITH JOHN OLIVER is the only weekly news-oriented comedy series to be presented on Sunday night. Taped on Sunday evening in New York a few hours before it debuts on HBO, each edition of the show will feature a mix of topical commentary on the previous week’s events. It also will contain pre-taped pieces and an interview.

Are you looking forward to LAST WEEK TONIGHT WITH JOHN OLIVER? Check out this promo from his former gig.