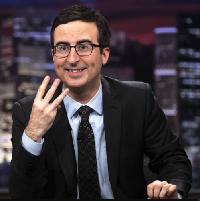 I wasn’t sure I was going to do this every week, but here I am with another LAST WEEK TONIGHT WITH JON OLIVER piece. The only reason I am posting this really is because of the comments I made in last week’s post. I had noted the censored images that appeared in the telecast and they were not just blurred imagery but black barred ones. My thought was like “Hey, doesn’t John Oliver realize yet that he is on HBO?

Well lucky for us and Mr. Oliver in Episode Three, which debuted on 05.12, he did acknowledge and use to his advantage the fact that he was indeed on HBO. Did you see this? He was in the midst of talking about an election race in the state of Kentucky of all places and the particular smear campaign the two opponents were using on each other. Well, John wanted to help them out and give them each a better ad to attack the other with and since he was on HBO he could utilize two elements often seen on HBO to spice up the advertising. To cite his examples he was going to use the gory violence of TRUE BLOOD and the blatant nudity of REAL SEX.

Unfortunately we don’t have those political ads to show you, check out the episode on HBOGo, but here is a quick shot of the Mitch McConnell 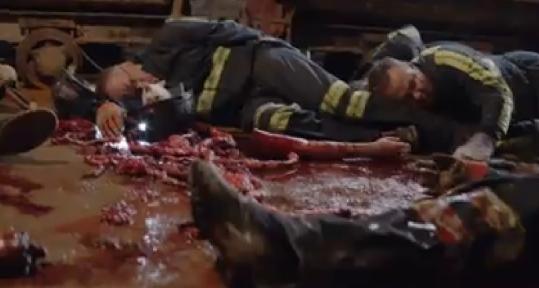 smear ad as he paints his opponent as a vicious attacker of Kentucky’s coal industry showing gore and body parts and even a little kitten that gets killed as well.  And Alison Grimes jab at her rival starts off this way –

“Unfortunately, Washington has been run for too long by old, white, wrinkled dicks – and no dick is older, whiter or more wrinkled than McConnell.”

Then we cut away to a close up of an old, white, wrinkled dick, as in real male genitalia. And not just once but six more times! So, hey, for those of you following the “Getting The Shaft” post there is your gratuitous manhood shot, though I don’t think it is the specimen you had in mind.

I’m sorry those clips are not available for view; besides I don’t think my editor would like the dangly bits on his site. Mother Jones attempted it and got it banned; they did get an interview with John Oliver about that comedy ‘bit’ which I excerpt here.

Mother Jones: Whose idea was it, if you recall, and whose penis did you use?

John Oliver: Okay, those are two excellent questions. The first one, I’m not sure, and it might help to just [go with] collective responsibility. I don’t want to go with a sort of “I am Spartacus” moment but I think plausible deniability might be useful at that point. The second is the much more interesting question. And that is that, of course, you do need to cast a penis. And to do that you have to be presented with a selection of penii—I don’t know if that’s the collective term. And so then what you’re looking for—it’s amazing—when you look at then you start judging them for the purpose, because you want something that is funny but not sad. Because, you know, a sad penis does not help the comedy. No, it makes you think about the person the penis is attached to. So really, you just want a representative old man penis. And I’m not sure that sentence…has ever been said out loud before…We got to one that we liked, and the owner of that penis was generous enough to model it for us.

MJ: How did you get to one you liked? Like, what is the process of “getting” penii?

JO: We went through photos. It was basically the penis version of a headshot. 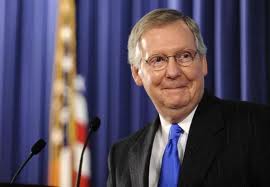 JO: Models, basically. And you go through and say, “This one’s good, this one’s good, let’s get down to a short-list. Okay, it’s between these three. Um. I like this one.” And then what you do is you make a decision, you walk out of a room, and you stare out a window and question what the fuck you’re doing with your life…That’s basically how it goes.

MJ: I’m assuming you weren’t in the room when they shot it?

JO: I actually wasn’t because we were having to write…But apparently the man was very happy…I just came back and our editor, she had to live with that footage for a few days, but she did a fantastic job.

MJ: Has she recovered, psychologically?

JO: Yeah, she was very good. She’s called Cori McKenna, and she actually edited both the commercials…The other commercial was basically a chainsaw massacre in a mine involving a kitten, and I think she found that slightly less alarming to cut together than a sequence of beautiful tracking shots of an old man’s junk.

Other topics were broached, of course, and I can offer a clip regarding. Here is the Climate Change piece that was a part of the episode.

So, again I don’t know if this is a running bit we will continue on HBOWatch weekly or not, but if LAST WEEK TONIGHTWITH JOHN OLIVER strikes me as particularly funny or offers a clip or two to upload you just might see another post after episode 4. Thanks, John.