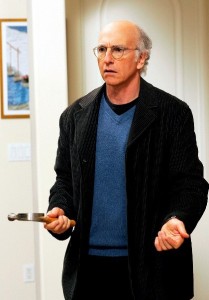 Curb Your Enthusiasm season nine seems to be on the back burner but fans may not mind because a new Larry David project is in the works! An HBO movie is planned and today Deadline has revealed some of the All-Star cast members of the new flick: Jon Hamm, Michael Keaton, Bill Hader, Kate Hudson, Phillip Baker Hall, Danny McBride, Eva Mendes, Amy Ryan, and even Curb Your Enthusiasm’s JB Smoove!

The movie will be called “Clear History” and:

“…centers on former marketing executive at a start-up electric car company Nathan Flomm (David) who, after losing a fortune due to a petty argument with his boss (Hamm), is publicly humiliated for walking away from his 10% of a company now worth billions. Ten years later, his marriage over and reputation ruined, Nathan has changed his identity and lives a simple life on a small island off the coast of Massachusetts under the new name of Rolly DaVore. But when his former boss shows up to renovate his summer mansion, Nathan vows to seek his revenge and drive his nemesis off the island.

There are more details over at Deadline but no word on a possible premiere date for the film. We can’t wait to see what Larry is up to and with this blockbusting cast it’s hard to imagine it failing! We’ll keep you posted on the latest as we get it.