I don’t think I’m the only one confused about the new docu-comedy series coming to HBO late night. In fact, I know I’m not based on the opening line of the trailer announcing HOW TO WITH JOHN WILSON.

I’m not trying to discredit the guy, but I guess anyone with a camera and an inquisitive nature can get a show on. I can see if it went over to HBO Max, to help build up its library, but on HBO? Nevertheless, it arrives Friday nights at 11:00pm in ROOM 104’s timeslot. Below are details:

John Wilson, documentary filmmaker and self-described “anxious New Yorker,” makes his HBO debut as writer, director, cameraman, executive producer and narrator of the all-new, six-episode docu-comedy series HOW TO WITH JOHN WILSON, debuting FRIDAY, OCTOBER 23 (11:00-11:30 p.m. ET/PT). Nathan Fielder (“Nathan For You”) also serves as executive producer, alongside Michael Koman and Clark Reinking. n a uniquely hilarious odyssey of self-discovery and cultural observation, Wilson covertly and obsessively films the lives of his fellow New Yorkers while attempting to give everyday advice on relatable topics. The awkward contradictions of modern life are eased by Wilson’s candid, unpolished commentary, with season one’s episodes offering up his distinct take on a range of deceivingly simple topics. Building upon Wilson’s previously released “how to” short films, the episodes take wildly unexpected turns, but are grounded in John’s refreshing honesty.

Following his graduation from college, John Wilson took an unorthodox path by spending a year working for a private investigator, an education that inspired his “documentary memoir” shooting style. Equal parts ethnography and autobiography, his films are all shot from the first-person perspective and underscored by his distinct, wry narration style. While Wilson’s anxieties flared amongst large film crews, he found his groove making hilarious “how-to” videos that he released for free on the internet. His short films “Los Angeles Plays New York” and “The Road to Magnasanti” were official selections of the 2016 and 2017 New York Film Festival.

So, either this guy is going to click with you or he is not. If you don’t embrace his style you will have taken in one episode and done. If you do decide to share in Wilson’s musings here is what you can be prepared for:

John Wilson taps into his “Memory Palace” for an unforgettable exploration into our ability – or inability – to remember things. Written by John Wilson, Michael Koman, Alice Gregory; Directed by John Wilson

–Season 1, Episode 4 “How To Cover Your Furniture” 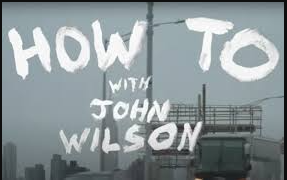 John Wilson attempts to make sense of the intricacies – and fairness practices – behind the complex art of splitting the check. Written by John Wilson, Michael Koman, Alice Gregory; Directed by John Wilson

To thank his elderly landlord for all the times she has cooked and cleaned for him, John attempts to make her favorite dish. Written by John Wilson, Michael Koman, Alice Gregory; Directed by John Wilson.

Is anyone going to check it out?