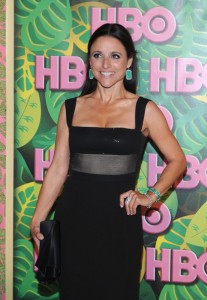 Dreyfus will play a fictional Vice President, Selina Meyer, a former senator who becomes VP after losing a primary to the man who eventually becomes president.

According to press for the project, Selina Meyer “finds being Vice President of the United States is nothing like she expected and everything everyone ever warned her about.”

While many have tried to draw parallels between Veep’s lead character and and Sec. of State Hillary Clinton or former vice presidential candidate Sarah Palin , those who have read the script report that Vice President Selina Meyer isn’t quite like either of the real-life politicians.

Other characters in the pilot include a “sharp-tongued chief of staff,” a “slobbish press secretary,” and a “liaison between the President and VP’s offices .. who is extremely unattractive and creepy but hopes his role as a White House “big shot” will someday impress the chicks.”

No word from HBO on a premiere date for the new series but with filming beginning in just over a month we could see the show on the silver screen later this year.