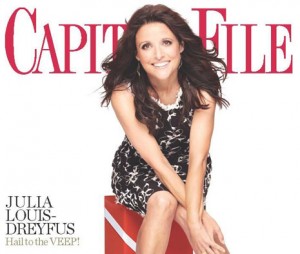 Former Seinfeld star, Julia Louis-Dreyfus is rocking the cover of the Winter edition of ‘Capitol File’ this year. She spoke with the luxury magazine about her new role on the new HBO series Veep. “The New Adventures of Old Christine” star will portray a new character, Selina Meyer, a senator from Maryland who eventually becomes vice president.

The actress supported Barack Obama in the 2008 election but she assures viewers that her character in the new show doesn’t take sides saying:

“You will never know what party she’s in,” said the actress and native Washingtonian. “There’s talk of the opposition and that party and this party, but it is never identified. So this is not a partisan politics show in any way. What it is, though, is a show about political behavior. And that is where the comedy comes from. … This is in no way a parody of Sarah Palin or any other female politician.”

She added, “Veep is a comedy that pokes fun at “all politicians, and the way Washington is run.” And there’s plenty of cursing, too. “It’s going to be unbelievably raunchy and funny.”

Proving as much she posted the following on her Facebook page: “That’s right, motherf#$!ers, I get to use very bad language.”   Welcome to HBO, Julia!  Want to read the rest of the interview?  Check out Capitol File Magazine.

Veep does not have a premiere date yet but the pilot has been shot and the first image of Julia Louis-Dreyfus as Vice President Selina Meyer was revealed in an HBO preview spot last month.  Keep an eye on our HBO series premiere schedule for the latest news on an air date.  Spring 2012 would be our best, educated guess alongside Season 2 of Game of Thrones.