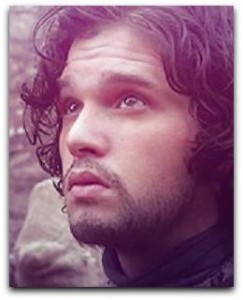 Out of respect for the non-book readers, I won’t make reference to specific events that occur in the last three books.

When it comes to a series, I don’t ask for much.  Your run of the mill masterpiece is all I’m looking for.  That’s hardly unreasonable.  Deconstructed simply, present a well thought out, brilliant storyline.  Give me characters that lift my spirits or break my heart.  All I want is to be consumed.

‘Game of Thrones’, the adaptation of George R.R. Martin’s ‘A Song of Ice and Fire’ series is, in my humble opinion, one such work of art.  I should really send George a ‘Your series completes me’ fruit basket.

And the subtext would read ‘I’m forsaking reality in order to shack up with one of your fictional characters.’

Jon Snow.  He’s prettier than half of Craster’s daughters.  His luscious, curly locks are the envy of many a modern day maiden, his mellifluous voice is sweeter than the caress of a lullaby and a glance from his doe eyes can emotionally manipulate/destroy any female who has a pulse.  But Jon Snow is so much more than a beautiful man wearing too many layers of clothing.

Kit Harington’s interpretation of the character is flawless.  Jon is 14 years old going on 15 years old (awkward) and Kit, who is essentially 10/11 years older than his character, still manages to effortlessly bring all the gritty angst and impulsivity – characteristics that (partially) define Jon – to the role.   In stark comparison, he masterfully portrays the boy who possesses a wisdom that’s beyond his years, kindness that darn near breaks your heart and a perceptiveness that allows him to read the world and those around him and gain implicit understanding. 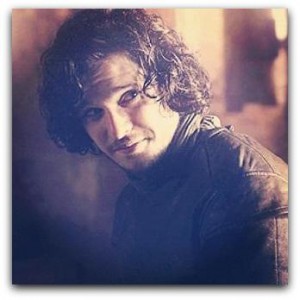 Often referred to as the bastard son of Eddard Stark (may he rest in peace/pieces…too soon?), Jon is one of the most captivating, enigmatic characters in both the book and televised series.   Upon first (second and maybe even third) glance, he could mistakenly be perceived as an emo, sullen young man who’s on the verge of tears/a tantrum.

Pose the subtly flirtatious question of ‘Who’s your mama?’ and you’d be likely to receive the full brunt of his angst and confusion.   Jon knows as much about his mother’s identity as he does about ‘how to do it.’  Okay, just this once, all together now, ‘You know nothing, Jon Snow.’

Ned Stark was always painfully secretive about who Jon’s mother is but he vowed to divulge all one day.  His decapitation subsequently put an abrupt end to that plan, however.  There’s a large amount of speculation surrounding Jon’s parentage but it is, in essence, just speculation as Martin hasn’t written that part of the story yet.   Based on book ‘clues’, there’s one very plausible theory and while I won’t mention which one it is that I support 100%, nay, 110%, I will say this:  A direwolf sigil and a dragon sigil, sitting in a tree…

When you delve deeper into young Snow’s background, you’ll develop a firmer grasp of why his internal conflicts rage.  The ‘woe me’ expression stems from a boy who’s on the brink of manhood and who grapples with all aspects of his identity, from his place within his family to his place in the world.

Jon was raised amongst his five Stark half-siblings in Winterfell, but he doesn’t bear the Stark name.    Labeled a bastard and labouring under the name ‘Snow’  – the name given to all bastard children who are born in the North –  Jon knows that , even though he’s adopted the Stark family values of honour, bravery and loyalty, he’ll never hold the noble title of ‘Lord’.  Those who mockingly refer to him as ‘Lord Snow’, well, lets just wager that, while he doesn’t ‘stick them with the pointy end’ of his sword, he’s thinking about it.

His illegitimacy torments him to such an extent, he can’t bear the thought of fathering a bastard of his own and resigning the child to the same fate.  Jon, I dub thee:  Virgin for a cause.

Scorned by his step-mother, Catelyn – may she be crushed under the weight of my contemptuous gaze – he has never had a loving maternal figure present in his life.   Everybody needs a hug, Lady Stark.  The strong urge to protect him, to throw my body in front of his just to shield him from a nasty look is becoming embarrassing.   Well played, Kit, well played.

He has a good relationship with Ned, his half-sister Arya and his half-brothers Bran and Robb, but he still feels the alienation acutely. 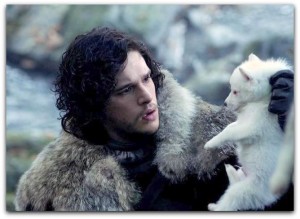 Perhaps it’s for this reason that Jon gravitates towards all manner of spurned and broken things.  His direwolf, Ghost, is an albino with white fur and red eyes – the runt of the litter.  When the pups are discovered, Ghost is the only pup whose eyes are open.   Because the wolves are so closely linked to their respective owners in terms of mannerisms and characteristics, the significance is difficult to overlook.  Besides symbolizing differentiation, it signifies Jon’s perceptiveness, his ability to silently watch and see what others are blind to.

He forms an amicable relationship with Tyrion Lannister, the Imp who is no stranger to rejection and ridicule.  And again, at the Wall, he befriends the cute-as-pie Samwell Tarly, a fairly useless young lad and self-proclaimed coward whose own father wanted him dead.  In many ways, Jon becomes a champion for the underdog.  He defends and protects those who are incapable of doing it themselves.

Eager to forge his own path, he impulsively heads North with his Uncle Benjen to join the Night’s Watch without fully understanding the implications of his decision.   The brotherhood (sworn to celibacy, Jon, celibacy) serves at the Wall in less than snug weather conditions.  Their lives are dedicated to defending the realm against wildings and their traitorous leader, Mance Rayder, Wights, White Walkers and other unsavoury characters. 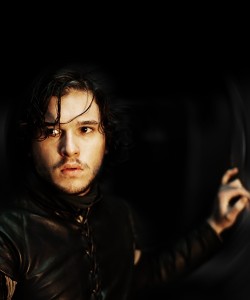 Jon’s desire is to become a Ranger like his Uncle.  He goes in search of the opportunity to prove himself, but what he finds at the Wall are outcasts, thieves and rapists.  Initially, this bitterly disappoints him and the glorious sulk prevails.  But his disdain for the others is short-lived.   Tyrion points out that Jon may have misjudged and jumped to erroneous conclusions and, in the end, a figurative group-hug goes down and Jon even begins to crack a few smiles.  Sublime.

The greatest appeal, perhaps, is that, upon taking his vows, his name and background – elements that have defined him  all his life – are of no more consequence.  But, in becoming a Black Brother, he has to renounce all familial and friendship ties.  This causes the curly haired dove more torment-ridden days and frown lines.  His loyalty to the Night’s Watch is severely tested when he learns that Robb is marching to war and that his father’s head is perched atop a spike – Joffrey’s queer idea of decoration.  Jon’s instinct is to rush off to fight alongside his half-brother.   He leaves during the night, knowing full well that it’s tantamount to a death sentence, but his brothers at the Wall go after him and bring him back.  While he stubbornly plots to leave again, he makes no more attempts to do so.  He ends up honouring his vows and committing fully to the Night’s Watch.  (Sidenote:  Sadly, this meant no extended ‘wind whipping through his hair as he rides with haste’ scenes and the world is poorer for it.)

The event that catalyzes Jon’s maturation process is the disappearance of his Uncle Benjen who has gone North of the Wall.  Commander Mormont puts together a ranging mission to find Benjen Stark.  This fills Jon with a sense of determination and gives him the purpose that he so eagerly seeks.  It also marks the end of wooden sword play and the beginning of real combat.

Of all that Jon experiences North of the Wall, the thing that confounds and terrifies him most:  a woman.  He fails to kill the wilding, Ygritte, and, in the televised series, they traipse, lost, through the snow and he refuses to ask for directions.  Add to that, he has to deal with the slew of (literal) below the belt comments that she tauntingly levels at him.

No one does ‘awkward, uncomfortable virgin’ quite as magnificently as Jon.  His encounter with Ygritte is a ‘coming of age’ tale that ultimately has a number of happy endings.

While Season 2 may be coming to an end, Jon Snow’s journey is but a fledgling.

Monique Jacobs is a writer by design.  I’m a grammar nazi by choice.  Together, these two personas combine to conquer the literary world. (The term ‘conquer’ is used loosely.  Some may even say fictitiously.)