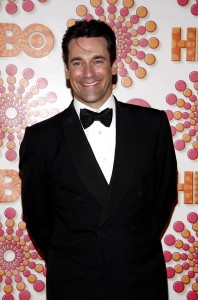 We can’t wait to hear what Jon Hamm has to say about the political realm.  He’ll probably mostly be pumping the new season of Mad Men which premiere’s with a 2 hour special on March 25th.  We can’t say we’re excited to see Game of Thrones season 2 go up against the most award winning TV show on the air in the same time slot but we’re confident people will use their DVRs to catch both.  We already know he loves Game of Thrones so I wonder which show he’ll be watching!   I also wish we could have seen Mr. Hamm on the Real Time panel!  Maybe next time, right Jon?