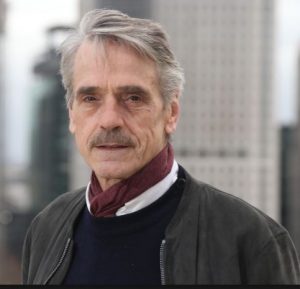 Not a lot of news is coming forth about the WATCHMEN series by Damon Lindelof. He is still generating a pilot episode for the series based on the Moore/Gibbons work. All we are sure of is that a cast of big names is involved and that the series is not a retelling of the graphic novel. The premise remains the same though, that superheroes are not cool or appreciated in this world.

Another big name joins the cast list and it is Jeremy Irons (recently Alfred Pennyworth of Justice League). Our source says he is playing a lord of a British manor. And that vague description seems to be common for this series as again, information is scant.

Also joining Regina King, Don Johnson, Tim Blake Nelson, Louis Gossett Jr., Adelaide Clemens and Andrew Howard & Irons will be Yahya Abdul-Mateen II (First Match) and Sara Vickers (Endeavour).  He will next be seen as villain Black Manta in James Wan’s upcoming Aquaman. Also included are three young actors that might not be recognizable but have garnered some experience before. They are Dylan Schombing (Girlfriends’ Guide to Divorce and SHARP OBJECTS), Adelynn Spoon (theatrical Charlotte’s Web) and Lily Rose Smith (The Vampire Diaries).

At the latest TCA event Programming head Casey Bloys stated that “I have very, very high hopes.” They did a great job. Damon wrote a phenomenal script, and Nikki Kassell (the pilot’s director) did an amazing job shooting the show. I think we see it in a few weeks. So, we’ll see.” That ‘we’ refers to the HBO executives who will get a screening of the pilot to determine whether or not the project will actually get to proceed to series.

Frustratingly, any further developments of character or sneak peeks at clips are yet to become available. Nevertheless, we are still curious for WATCHMEN as it slowly comes into being. If the original superheroes (The Comedian, Rorschach, Ozymandias etc.), are not to be in it then just who are the outlawed superheroes of Lindelof’s version? A lot ahead to be revealed. HBOWatch will keep you posted.