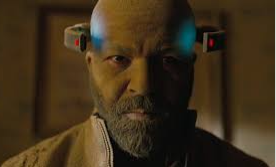 Since we haven’t heard anything about WESTWORLD in a long while we thought we better drum up some news about it. Even though the following remarks happened a while ago, they are better than nothing as fans have missed the Hosts and their exploits. Jeffrey Wright, who plays Bernard Lowe, Westworld’s Head of the Programming Division (Behavior) and programmer of Host software, and also Arnold Weber, the cofounder of Westworld, offered Deadline some intel.

Keep in mind that the main reason for halting production was because of the pandemic. The last season was shot prior to CO-VID and aired its last episode of that season on May 03, 2020. Production ceased and did not resume until the Fall of 2021. This is what Wright says about it all:

“We wrapped last December, but I’m not exactly sure when it’s coming out. Season 4 is going to be more of the Westworld you’ve come to expect and more digging down into some issues and some technology that is going to look familiar to us, as always. It’s gonna be exciting. I’m not sure exactly when we’re to air but within the coming months, certainly.”

Not much there but something. So, we have to ask, as we look down the line, is the big summer show then going to be WESTWORLD or HOUSE OF THE DRAGON or are they going to take up our Sunday & Mondays nights in tandem come June? Don’t forget that Programming Officer Casey Bloys did confirm that

WESTWORLD was slated for summer 2022. So, we should see imagery soon of some sort. All we have now is a few quick glimpses from the 2022 Sizzle Reel.

So, there is plenty of time for you to get caught up with the series if you need to before Season 4. Quite a bit went down regarding Rehoboam and all. Again, if you need to refresh on it, binge it!

Oh, one additional note we can add is that Ariana DeBose (West Side Story) is set for a key recurring role in the upcoming season. No word of her character so it must be a pivotable one. Now, go binge!