INSECURE has been a strong show for HBO and its co-creator Issa Rae. She has stood out in her field and has proven quite a busy person. She has a bestselling book, has produced music videos, has had movie roles (all having appeared on HBO) in The Hate U Give, Little and The Photograph with more on the way. Plus, just recently, she became a Television Academy Executive Committee member.  As she moves upward and forward in the industry it only makes sense that the show would have to conclude sooner than later. Well, it has been officially announced that the upcoming fifth season will be the show’s final one. Via a release –

“Issa has turned insecurity into an iconic form of comedy,” said Gravitt. “The show is as incisive as it is heartfelt, and it has resonated strongly with its audience because of the deeply personal work that Issa, Prentice, Melina, the cast and the writers have put into it. This talented team has conceived a brilliant final season for INSECURE and we look forward to having many more stories to tell with this singular group of collaborators.”

The series stars Emmy, Golden Globe and NAACP Image Award nominee Issa Rae who heads the ensemble cast, and the new season will continue to follow our favorite characters as they evaluate their relationships, both new and old, in an effort to figure out who and what comes with them in this next phase of their lives. The fifth and final season is scheduled to begin production later this month and is set to debut later this year.

INSECURE’s fourth season, which debuted on HBO last spring, was acclaimed by critics and fans alike. A.V. Club called it “by far INSECURE’s best season,” Hollywood Reporter praised the season as “funny as ever,” IndieWire hailed the series as “quietly groundbreaking” and Decider highlighted the season as “nimble and introspective.” 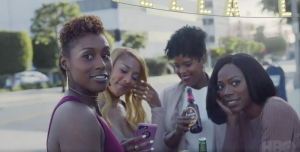 Rae told Deadline, “Prentice [co-executive producer] and I are so grateful that HBO believed in our show from the beginning and kept faith in us to see our vision through the end. We always planned to tell this story through five seasons, but we couldn’t have made it this far without the tremendous support of our audience.”

The first four seasons of INSECURE are available to stream on HBO & HBO Max.