With Game of Thrones ending next year, HBO hasn’t exactly been subtle about its attempts to make Westworld their hit series’ heir apparent in terms of popularity, and what better time to take stock of the show’s progress in that direction than with the finale of Season Two airing this Sunday?

It is tempting to approach Westworld’s  success comparative to that of Game of Thrones from a statistical stand-point, but for this article, I’d like to take a less quantitative approach, and focus more on my experiences watching Westworld as a Game of Thrones fan. In 2016, when Westworld‘s first season premiered, we still didn’t know about HBO’s plans to make a GOT spin-off, or that Game of Thrones would enjoy a year long hiatus before returning for its final season in 2019, so the search for a quality replacement for the show felt fairly urgent. Many Game of Thrones fans, myself included, approached Westworld with an enthusiastically open mind, in large part because by that time critics were already suggesting that the show could  serve as a worthy successor to the pop-culture giant that is Game of Thrones.

In a pedantic sense, the critics weren’t wrong— Westworld has clearly come from the same kitchen, and used many of the same ingredients as Game of Thrones. From the get-go, the series undeniably had all the markers of what makes Game of Thrones so successful—extravagant settings and effects, twisting storylines, complex characters, and of course a hearty dose of violence and nudity. While still having a distinct voice of its own, Westworld has so many technical and even thematic similarities to Game of Thrones, that it is difficult not to make comparisons, and HBO wants us to. Westworld‘s production and promotional budget is noticeably generous, and sleekly self assured in a way that outdoes the earlier seasons of Game of Thrones and not so subtly boasts HBO’s endorsement. 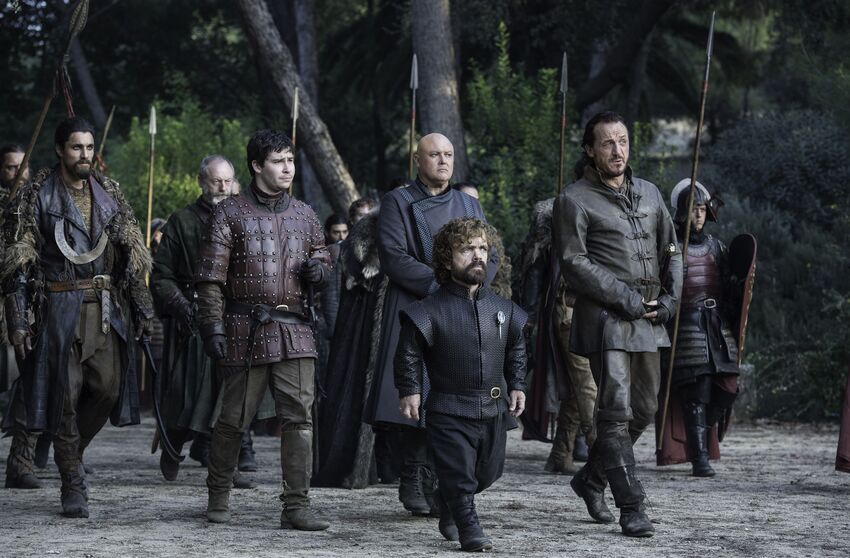 While Thrones fans have become almost complacent with the sprawling battles, breath-taking locales, and dauntingly sized dragons of the latest seasons of the show, Seasons One and Two, and to some extent Three were far more reserved in their use of special effects, costuming, and exotic filming locations. Such relative thriftiness, however, clearly had little effect on the long-term success of the show.  Game of Thrones is addictive for many reasons, the most important, perhaps being that is an incredibly rewarding show to watch. It’s a tired joke at this point that Thrones requires a certain amount of less than casual attention—there is a large cast of characters to keep track of, most of them with difficult to remember names, and they populate an expansive world that is itself a tangle of strange customs and cultures and magic that is hard to keep straight. Most wouldn’t consider Game of Thrones exactly an “easy” show to watch, but it still enjoys enormous popularity with viewers of varying ages and demographics. People seem to enjoy the show’s immersive offer of escapism, and part of that immersion comes with a certain level of investment on the part of the audience, in terms of energy and attention.

Game of Thrones invites you to master its intricacies, and rewards you the more you do, but Westworld demanded a similar commitment early on, and was rather ruthless to those who couldn’t keep up. Both Game of Thrones and Westworld are appreciated by audiences for their mysterious plot-lines and the theories that they allow viewers to formulate. In Game of Thrones, while the uncertainties and enigmas of the world of the show are certainly important aspects in its appeal, they are aspects—in Westworld they are the heart of the show. If Game of Thrones’ gimmick is that its characters are never safe from death, Westworld’s is that you never know what is going on. One is a gimmick that encourages us to keep coming back– the other is one that is easily off-putting.

Game of Thrones built up a mythos and a series of pressing questioning over a long period of time, questions we wanted answers to because we increasingly cared for the characters to which their answers were relevant. What did Lyanna whisper to Ned Stark? We wanted to know because we care about Jon Snow’s past and its implications for his life. There is  a reason that more people were interested in the revelation regarding the origin of Hodor’s name than in the back-story of how the White Walkers were created.

In contrast, Westworld introduces hundreds of questions immediately, long before we have much investment in the characters or the world, and so we become invested in  solving the show’s riddles, more just for the fun of it, than because we care about their answers’ implications.

In the age of the internet, such an approach to storytelling is a clever attempt at building a dedicated and immediate fan-base reminiscent of the one that Game of Thrones has developed over a series of years—and it worked. Online communities have banded together to dissect everything from Westworld’s winding episodes to its coded trailers with an approach that has created  levels of obsessive, albeit impressive collaboration that remind me as much of solving a puzzle game as it does discussing a show. A lot of the time, to me at least, such intense and all-consuming ways of engaging with the show feel irritatingly necessary and more like work than I would like.

I’ve spent a fairly large amount of time on and off-line over the years, researching Game of Thrones’ faux- histories, debating the meaning of prophesies and the motivations behind plots, and discussing my favorite characters, but I never felt that any of that was  essential to my or anyone else’s enjoyment of the show. With Westworld, if I don’t spend enough time trawling through forum threads after each episode, I know I will miss something vital to my understanding of the show, and it often feels that the show was designed that way. Westworld’s heavy official online presence evidences that the show has been created to be a large and synergistic scavenger hunt. It is a show that asks you to become fanatical about it from day one, and there’s something rather rankling about that. My investment feels artificial, if not coerced.

As someone willing to commit far more time to fake worlds and their inhabitants than other people, I still resent the amount of effort Westworld exacts for something I ultimately consider entertainment. Westworld fosters a faux-intellectual elitism that makes it difficult for it to absorb the Game of Thrones audience, which accommodates a varied audience in terms of levels of engagement.  In Game of Thrones you don’t need to know the difference between a “White Walker” and a “wight,” to feel that the stakes are real for the lovable Jon Snow when some ice monsters crash into his plot-line. I don’t sense the same spectrum of appreciation is available or encouraged in Westworld.

Westworld is creating and courting a comparatively small, hyper-dedicated fan-base, which is marvelous for those who enjoy the community, but that approach is going to make it difficult to compete with Game of Thrones. Now don’t get me wrong, I’m the first to complain about Thrones’ increasing simplification in its later seasons, but the truth of the matter is that the show has become more and more accessible because that is what allows it to have the largest audience, and to be a financial success for HBO. Game of Thrones has become a household name. I’m not sure Westworld, in the direction it is going now, is going to be able to achieve that.

In light of HBO’s increasing commitment to making a Game of Thrones spin-off (or two, or three), the discussion over what makes a good GOT replacement is more timely than ever. Westworld is without a doubt a skillfully written, expertly produced, and visually striking series, but for me, at least, it lacks the heart of Game of Thrones, which started off as a gamble in a world where fantasy was not exactly a mainstream television genre, and earned its popularity on its own merit. Westworld is a laudable show,and I am sure it will continue to enjoy a great deal of success, but ultimately, I don’t think it is the next Game of Thrones.

Can Westworld replace Westeros? We want to hear from you! Leave us a comment.