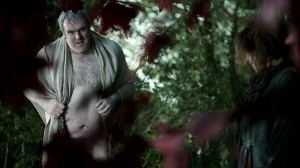 According to a study by the Parents Television Council, full-frontal instances on network TV increased 6,300 percent in 2012. Full nudity (non-frontal) is also rising, jumping 407 percent from last year. If the networks are showing a 6,300 percent increase in full-frontal nudity, it would stand to reason that HBO would be showing us bunches of boobs and a plethora of penises, right? Well… not exactly. HBO, as always, treats us to lots and lots of breasts and plenty of female full frontal, however, we are totally getting the shaft, penis-wise.

Other premium channels, Starz, for example, has been generous with us in the penis department. The Spartacus series is the perfect place to go if you want to see, ehem… cock. Lots and lots of cock, in fact. And I’m not just talking about random guys in the background of the Ludus or secondary characters wandering around, oh no. You’ll see the penises of the stars on Starz. Major characters like Manu Bennet and Craig Parker went full frontal on the series. Da Vinci’s Demons, one of the newer arrivals to Starz, also gave us several penis shots during its first season, and they don’t discriminate. Old, young, big, small, season one was actually a bit like watching a lesson in male anatomy.

Showtime has also had their fair share of penises on display. One fellow in particular that comes to mind is Jody (Zach McGowan) on Shameless. Not only did we get a look, they even gave us a long close up. It was, shall we say, memorable. Overkill? Heck no! It was situational and it drove the plot, which is more than I can say for countless shots of female full-frontal nudity or breast shots.

So where are the penises showing up on HBO? Since Oz has been off the air, they’re appearing primarily on Game of Thrones, however not in great numbers. So far we’ve seen Theon Greyjoy, Hodor, and the creepy wine seller bare it all. Will we see more in the coming seasons? Let’s hope so, as we’ve seen enough full-frontal female nudity on Game of Thrones to last us several, extra long winters. And dear HBO, in the future, if you’re going to display male genitalia, how about going a bit heavier on the younger, and/or more attractive male cast members wandering around unwrapped? More in the Theon category, than the Hodor, perhaps? Although not too young… this is Game of Thrones we’re talking about. And let’s face it. It would be hard to be grossed out by Charles Dance or Michael McElhatton, even if they’re not as young as they used to be.

Another thing you’ll find on Game of Thrones is copious numbers of boobs. Check out Wall Sushi’s excellent infographic of Boobs Per Episode of Game of Thrones (Season 1) if you don’t believe me. In fact the producers of the show seem to like to feature breasts so much, in addition to numerous brothel scenes, they actually have added female characters with speaking roles who have spent seventy five – one hundred percent of their screen time, unclothed. It’s easy to see that the number of breasts versus the number of penises shown on Game of Thrones is not even close to being in the same ballpark.

During this season of True Blood, we were shown slightly more than we’ve seen in past seasons, however, a quick flash of the outline of Alexander Skarsgard’s vampire genitals from about a mile away, and in shadow, is not exactly what I would call full-frontal male nudity. Nor is the bloody mess of dismembered member that Eric ripped off of a doctor at the Vamp Camp and left lying in a pool of gore.

Why then, does HBO, a network that airs shows like Hung, which is actually about a man who possesses and extra large appendage, seem to be so slow to show us the money shot? It’s a question worth asking. Is it because the people making these decisions are primarily male and therefore, not interested in equality when it comes to nudity on their shows or their network? I would argue in the case of Game of Thrones, that the answer to that question is yes. But is that the case across the board? Or could it be an insecurity issue? Do the producers of HBO series “X” feel as though the fewer on screen penises they have to look at, the less they have to worry that they, themselves, won’t measure up?

How about the ladies? Does it make the average female viewer squirm to see Theon Greyjoy bear all? If so, what is it that makes us so uncomfortable? It’s natural, all men have one (well, OK, most men), and I’d be willing to bet most of us have seen one in real life, or in some other context. This isn’t the 50’s, I’d be willing to bet that we’re not all having sex with the lights off, so why are we against seeing an unclothed male on TV or in a movie? Rather than broadening our horizons and helping us to become more accepting of the male form, has the amount of porn that’s become available to us in our internet driven society actually hindered our ability to view and accept the male body as art?

Of course there are women out there who actually enjoy seeing an attractive naked man. Yes, we actually do exist! Some of us aren’t even ashamed to admit it. Those of us who enjoy reading (or even writing) erotica or watching a little (or a lot) of porn, on our own, or with our significant others, are certainly not averse to seeing an actor take his clothes off every now and then. It may not always feel socially acceptable, but women have sex drives, just as men do. And I’ve yet to meet a gay man who didn’t enjoy the occasional nude male TV or movie moment. Why then, with the amount of boobs on display, do we not get our fair share of the eye candy? 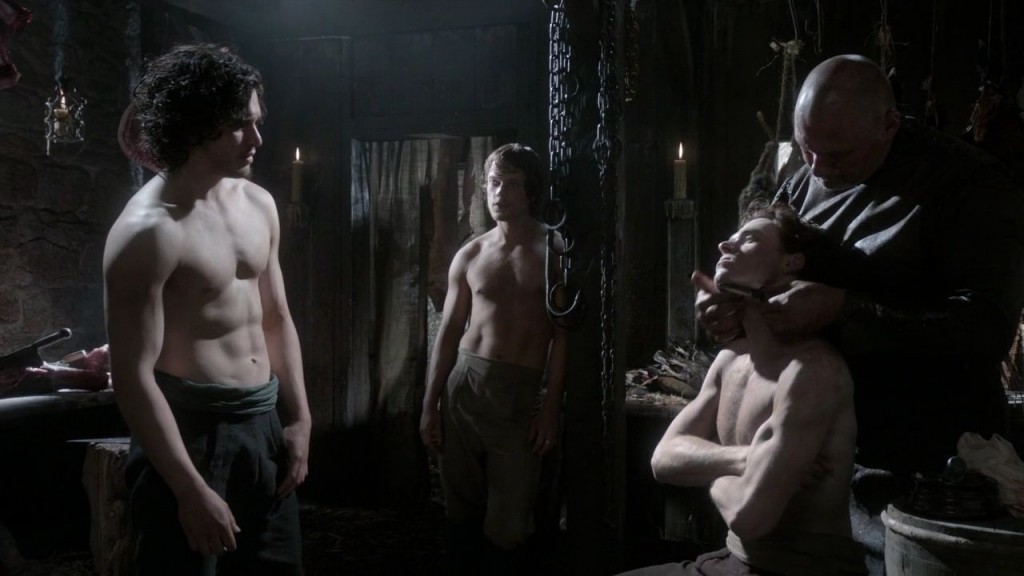 I still argue, however, that it will never be convincing to see a sex scene where we see a fully nude woman and never quite catch a glimpse of her partner’s anatomy. It takes two (or more) to tango, and so it seems odd that when watching a steamy scene, the man is always ever so strategically covered while the woman has it all on display. Is it not sexist (and no, I’m not a feminist, so please don’t accuse me of crying misogyny) to showcase nude women to the extent that we see in our television and movies today, and yet we see male genitalia so infrequently, that we it remains (to many) shocking and somewhat distasteful?

My hope is that one day we’ll see more male full-frontal nudity on HBO. Not because I want to see it, (hell, that’s what the internet is for!) but because male genitalia exist and I can’t see any reason to hide that fact. I’m not asking for fewer breasts, I’m just asking for equality. We’ve showed you ours, so you show us yours. Go on, I dare you!

UPDATE: Check out the other side of the “dong” story!