You do all know there are other shows coming in April to accompany GAME OF THRONES, right? The back-to-back comedic exploits of VEEP, entering its Season Four, and SILICON VALLEY, entering Season Two, will also rule the night. Recently those two comedies each offered up an Invitation to the Set that we will share here as a way of getting viewers excited for the return of both shows. HBO often sends a camera onto the set of its shows so fans can catch work in progress and get a sneak peek of what is happening in the series and what is on the minds of the performers and creators of a given show. Sometimes little surprises can be revealed.

We first look at VEEP. Season 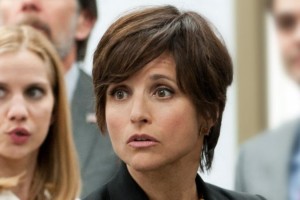 Four is a game changer for the series. Selina Meyer has been scraping by as Vice President for a while now and keeping her staff hopping as they attempt to keep her on an even keel. The end of Season Three, however, set up a big surprise as Meyer found herself stepping into the role of President. Even by lead Julia Louis Dreyfus’ own admission Selina was a lousy VP, so you can imagine what disaster could happen as POTUS.

If you missed how all that came about it is not too late to binge watch what this writer thinks is the best comedy on HBO right now. VEEP can be found on HBOGo or via Amazon as a DVD or Instant Streaming. Now comes Season Four. As POTUS any bungling by Selina comes a lot more serious. Here is Invitation to the Set: VEEP.

It is no surprise to us that Hugh Laurie is onboard; we reported it before. This is a first glimpse of who he plays though. It seems he is smart on the uptake and can see right through Selina Meyer’s silly façade. He will surely be sending trouble her way. Can she and her staff handle what he might dish out and what if there is a critical national disaster on her watch? It could get hilariously scary.

t scary but certainly hilarious is SILICON VALLEY. The show got awarded a second season and the show’s tech team are now riding high with their Pied Piper. Fielding business interests could get quite intense for our bros. Can they handle it? We wager most of Season Two will venture into just how they will manage all that with the big companies nipping at their heels. They got to keep Pied Piper moving forward despite the pressures, stress and quirks they have. Good Luck!

There was an earlier promo piece, but here is the Invitation to the Set: SILICON VALLEY.

Doesn’t that just want to make you root for Richard? This show is also available on HBOGo and Amazon. SILICON VALLEY airs at 10:00pm ET and VEEP airs at 10:30pm ET beginning on Sunday, 04.12 after GAME OF THRONES. LAST WEEK TONIGHT WITH JOHN OLIVER airs at 11:00pm ET. Sunday Nights on HBO are going to be good this Spring!