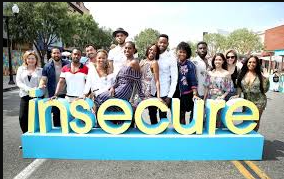 We knew that the upcoming Season 5 of INSECURE would be the final season. We now know that the last ten episodes will start SUNDAY, OCTOBER 24 (10:00-10:30pm). As per the show’s premise, the final season will evaluate the relationships, both new and old, of all the characters in an effort to figure out who and what comes with them in this next phase of their lives. Returning are Issa Rae, Yvonne Orji, Jay Ellis, Natasha Rothwell, Amanda Seales and Courtney Taylor.

The last time we saw Issa & friends was back on June 14, 2020, when the last episode of Season 4 aired. That episode called “Lowkey Lost” (every episode was titled ‘lowkey’ that season) had everything just about to gel and it all, of course, turned to mush shortly thereafter – they end up back being lost and insecure. Lawrence (Jay Ellis) pops back up in Issa’s life to bad results; Molly (Yvonne Orji) has a falling out with just about everybody including Andrew (Alexandra Hodge) and Tiffany (Amanda Seales) was literally MIA.

Who has whose back and how is that search for security and happiness going to go for these gals and their relationships moving forward? How is our peek into the lives of these characters going to conclude? What does Issa Dee have to say about all this?

Ouch. She is still out for the one thing we all are after, to just be drama-free and happy. I’m sure fans and HBOWatch will be glued to see if it all turns out well. Girl, time to take control over that pushy little voice in your head. All will be made clear on 10.24 when the final season of INSECURE begins.

Join us for INSECURE.