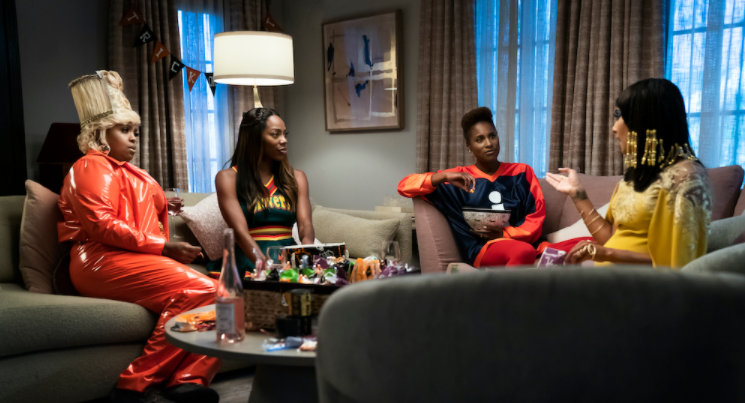 Alrighty, folks, another Insecure Sunday has come and gone. Here’s a recap of this week’s episode 2, “Lowkey Distant.”

Overall, I’m enjoying the pacing and journey of our favorites. Lawrence (Jay Ellis) is in a good place. Issa is growing personally and professionally. And the friendship between Issa and Molly (Yvonne Orji) continues to be a fun roller coaster ride. Although Molly had many of us rooting against her last week, I’d say, she was a bit easier to not only understand this week but root for.

And that’s where I’ll start. Molly’s consistency in the first few seasons has more often than none, made life difficult for her. She possesses a forwardness that, depending upon the circumstances and delivery, bumps up against her “want” in the series. Whether it’s her quest for a man, her intense drive at work, or the way she holds her friends accountable, Molly and her message can be hit or miss. This week, it was on. Molly steps up and asks Andrew (Alexander Hodge) to be vulnerable. Sex is good. Humor is there. But for Molly, intimacy wasn’t evolving and she stood up for herself and it worked; eventually. Also, Molly did try and approach her workplace conflict with Taurean (Leonard Robinson) differently this time. When given an opportunity to step in and upstage him, she remained quiet-ish, thrusting the two of them into a closed-door moment. And this is where Molly’s character felt authentic. She did try and rectify an issue through true behavior change. It didn’t work, but it did allow her to take ownership and apologize for her past decisions. But, and maybe this is my love for the messiness of Molly, I see her dating Andrew, only to self-sabotage and enter a love affair with Taurean. 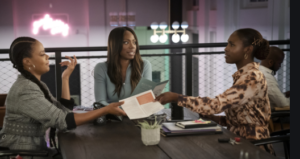 We’re reminded that we’re only three months away from the block party that ultimately leads to Molly and Issa no longer being friends and we can feel bouts of tension here and there. During a scene with the four girls, Molly and Issa address their distance but promise to do better. Molly even shuts out Issa’s efforts around the block party. Perhaps, the biggest moment of the episode is when Issa encourages Condola (Christina Elmore) to stay for food when Molly arrives at their hangout session. Molly was over it and so was I. Anyone else hate a late addition to a pre-planned gathering? Issa missed all the signs and it’s clear, though Issa is growing, she missed a clear moment to read the room. Issa and Molly do manage to get their self-care Sunday in thought. As Issa and Condola’s relationship evolves, the two finally addressed the elephant in the room: Lawrence. It’s a moment that needed to happen and boy was it perfect. They laughed about Lawrence using mayo with fries (yuck!) and vowed to not let the awkwardness reign supreme.

Speaking of Lawrence, he’s seemingly thriving this season. While I see some people lowkey hating on him for glowing up after Issa, I think that’s what should happen. Relationships help us dig deep and if we reflect, grow and move forward, we should ultimately be a better person and partner. But, Lawrence isn’t too happy about his ex, Issa, and new lover, Condola, talking about him. Although an argument can be made, either way, Lawrence decides to hit up Issa for a face-to-face. His ask is simple:  don’t talk about me, I’d like for Condola to get to know about me through me. Fair enough, yeah? But, the seed we saw planted was that Issa called Lawrence to confirm that their meeting was off the books and he agrees that it was. Tisk Tisk! This will lead to drama, mark my word!

I still find myself smiling throughout the entire episode. The music, the imagery and the characters are so undeniable. The writers do a great job, week over week, ensuring we’re included in the journey of our favorite characters, offering dimensions, intimate moments and genuine friendships to back it all up.

Here’s a promo for next week’s episode!