As we wind down (though I would prefer a wine down right now honestly) the fourth season, we see some relationship work come to fruition.  After reconnecting over dinner and art, Issa and Lawrence (Jay Ellis) are back on and apparently unable to keep their hands off each other.  Not surprising considering they are newly back together and everything is fresh and new again.  And it really is new.  These are not the same two people who started this show.  They each have evolved in their relationship and outside of it.  The last episode gave them a chance to air feelings, ask questions, and see each other as they are now.  Not who they used to be.  Artistically, one of the best episodes of the show.  But what now?

Lawrence admits he talked to Condola (Christina Elmore) and that’s over.  He’s in this with Issa and trying it again but is interviewing for jobs in San Fransisco.  Issa admits she still talked to Nathan (Kendrick Sampson) since he needs some help moving.  But she wants to be upfront about everything and honest with everyone.  When she goes to help Nathan, she tells him it’s back on with Lawrence, though Nathan is skeptical.  He

Areally likes Issa and hoped they might rekindle things.  She brings up how he bounced on her and his confession broke my heart.  He tells Issa he found out he is bipolar and needed to learn how to deal with living with that.  This is why we need to stop making assumptions and give people a little bit more benefit of the doubt!  So quickly people will jump to air annoyances.  Molly (Yvonne Orji) sh*ts all over Nathan bouncing on Issa in Mexico until Andrew (Alexander Hodge) says mental health was part of it.  Molly immediately backs off and asks if Nathan’s okay, but ultimately comes off looking kind of b*tchy about it.  We don’t know what a person is dealing with and when they inconvenience us or someone we care about, it’s easy to jump to the defensive.  But it makes me wonder what things have been said about me when I canceled because my anxiety was too bad to go out or my PTSD meant I couldn’t stop crying that day.  Everyone has struggles.  We’ve got to stop jumping to assumptions and give people space to acknowledge that they are going through something and that it is ok.  Kendrick Sampson did an amazing job and has been very outspoken on social media about the importance of mental health and breaking down stigmas around it. 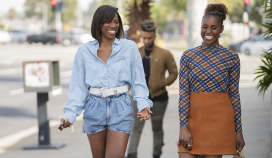 What is also ok is reaching out and trying to mend friendships.  Molly and Issa meet for brunch and at first, there is definitely a lot of awkwardness.  Not surprising since the last time the interacted I genuinely thought Molly was about to smackdown.  But eventually, they ease into their old pattern.  They’re laughing and having an ok time.  After taking Nathan over to Andrew’s to pick up some boxes, the two get awkwardly asked to stay for dinner.  So uncomfortable and forced.  But again, they get some wine going and everyone relaxes and it isn’t so bad until…  Okay, so in Molly’s defense, who hasn’t sent the wrong text message to someone before? Everyone has.  You click the first name because you think it is your boo you last texted but it isn’t and you send some awkwardness along.  Unfortunately, it sets things off and the confrontation over their friendship has to finally happen.  You can’t run from the drama forever.  And eventually, who you now have to face who you used to be.  And you have to make hard choices.  Friendships don’t last forever unless you put in the work to make it happen and when you’ve grown apart from someone, you have to ask yourself if that effort is worth it anymore.  We have one more episode left this season and honestly, I don’t know if my heart can take it, y’all.