Another week, and another outstanding instalment of 2020’s sleeper hit of the year. Industry was never going to be to everyone’s tastes, granted. When the financial jargon is laid on thick, it can be hard going, but the writing is that strong that you never lose sight of what’s at stake. But, it’s not in the trades themselves that the show maintains knife-edge intensity week in, week out. It’s the fear of loss that surrounds most everything else that swirls crassly around them. And, where the core of this story is firmly centred on who of our varied graduates will survive Reduction In Force day, as Episode Six drives home, there is significantly more on the line than initially appeared on the surface. Dignity. Respect. Reputation. Livelihood. 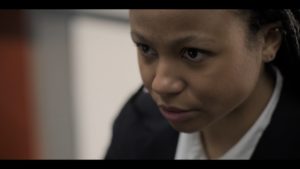 ‘Nutcracker’ picks up in what appears to be the immediate aftermath of Eric’s line crossing act, though we still cannot be certain if he locked that meeting room door consciously or subconsciously. As this week’s yarn takes shape, we only see him in one light, however, and it is that of the blasé sexist and manipulative narcissist. The episode is set against the all too familiar backdrop of the office Christmas party, which is a narrative masterstroke when you consider that the overarching theme that anchors every character thread is that of mixing business and pleasure. Or, to be more concise, your business life with your personal life. We know that Pierpoint have just lost a huge client partly due to their wife’s feelings toward Eric, and we’ve had more than enough time on the desk to witness how he’s forged a relationship with Harper. Then to be introduced to his wife, and to share in their relationship for a fleeting moment, is to understand that Eric’s manner is not something that is limited to the workplace. It is etched into his being, and all of a sudden, it rings more true that he should be the kind of man who locks a door for a reason. 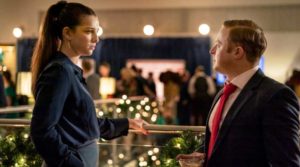 In a throwaway exchange between Robert and his visiting counterpart Usman, we additionally learn that there could be yet another huge loss to Pierpoint’s accounts in the form of Kasper’s retirement. Robert reacts in the moment, but the news is shared in such a pill-induced haze, you have to wonder when he might remember to relay it up the food chain. Keeping it to himself could cost him a permanent position, but then so too could lose the client. A real lose-lose situation brewing, but at least Robert was able to find solace in the hands of Yasmin. Their batshit insane sex games are ratcheted up to 11 this week in what is fast turning from ‘kinda hot’ into genuine concern for Yasmin’s headspace. She, of all our graduates, has had the hardest time keeping her personal life out of Pierpoint. She risks her relationship with long-time friend Maxim, while failing to land his business, culminating in further unprofessional errors when her immediate reaction to all of this is to seduce Robert on company property. Never mind that she’s back to square one with Kenny, whom she accuses of falsifying his newfound niceness as part of an unknown ulterior motive. Keeping to the theme, Theo’s wife is introduced to Gus. She’s predictably lovely, but there isn’t a shred of guilt or subtlety, and their obvious affections for each other are rightly exposed.

As we edge toward the final cut, and with its recent renewal for a second season, Industry continues to move from strength to strength. In a strictly jargon-free episode, it hammers home it’s the best chapter yet, which is unfeasibly uncomfortable from start to finish. Masterful television, if you have the stomach for it.