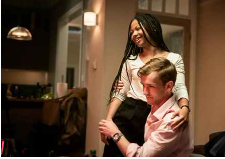 In its most captivating episode yet, Industry raises the stakes across the board and continues to deliver punchy, if incoherent workplace drama. Wherein the previous episode, you’d be forgiven for beginning to think that this might simply be Girls on Old Street (London, for the uninitiated), this week’s evolution starts to drive home the high stakes that up until this point have only really appeared as apparent.

It’s fun to mix amongst the trading desks at Pierpoint, just like it was fun to pretend that you understand just what the hell was happening in The Big Short or Margin Call. This doesn’t make it any less difficult, though, to really engage with what’s happening outside of the characters’ personal relationships during the hours between 9-5. Where this episode succeeds is that it maintains it’s commendable (if challenging) use of no-corners-cut financial jargon, but positions the peril in a way that’s straightforward enough for anyone to quantify. In short, Harper makes a desperate error and misbooks a trade with a prolific client that will not only cost the floor over £150k, but could severely threaten Pierpoint’s future relationship with them. Unequivocally, without either resolve or track-covering, this would cost Harper her job. 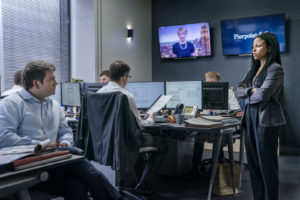 All this is made no less stomach-churning by the fact that she is trying to manoeuvre through the aftereffects of a mid-week all-nighter with Robert (who relentlessly seems to have no daily recovery issue). With a cocktail of drugs and alcohol will always come a day of unbridled anxiety, and throwing this into the narrative mix as a bonus challenge shapes the episode’s pace perfectly as it barrels towards a climax that sees Harper negotiating her way across London to offer up her last shred of dignity at the feet of the only potential trade she could possibly close to cover the aforementioned loss. It’s excruciating to consider that this is the route she takes, arrogantly, despite everyone around her imploring that she simply fess up to Eric who, up until this point, has done nothing but show her support. 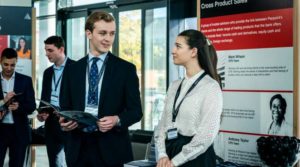 In the end, Eric (the show’s best character by a mile) proves his worth once again, even when discovering the first of Harper’s seemingly endless secrets – that her university credentials were forged. The moment of bonding shared by the two over a short cigarette break is exceptionally well-staged and highlights her immaturity beautifully.

Elsewhere, Gus begins to spiral as his relationship with Theo threatens to become violently public, while the psychosexual games between Robert and Yasmin escalate to a new, entertaining level. With this being another Harper-heavy episode, given the trajectory patterns so far, you can likely expect more fireworks from them next week.