Industry this week throws Harper back in the spotlight as she aims to get ahead at work, make friends and find herself someone to alleviate her sexual tension. At the end of last week’s episode, Yasmin kindly offered Harper a room in her parent’s luxurious London home. She seems to live in the annex of this home or in a separate wing of the house as she will happily go at it with her ketamine bombing boyfriend on the kitchen counter without any fear of being interrupted by a parent wanting to make a cup of tea, making it the perfect hangout spot for her, her friends, her boyfriend and his drug dealer. Harper is faced with some difficult choices this week as she is given a big opportunity at work but also attempts to make it clear she isn’t here for favours or handouts. The head string woman in her wants to get through this alone, without the hindrance of friends or romantic partners. While each episode feels more and more like an episode of Skins set in an office building, the relationships between the graduates are what drives the narrative and maintain interest. The financial jargon and day-to-day dealings of Pierpoint & Co is just white noise. 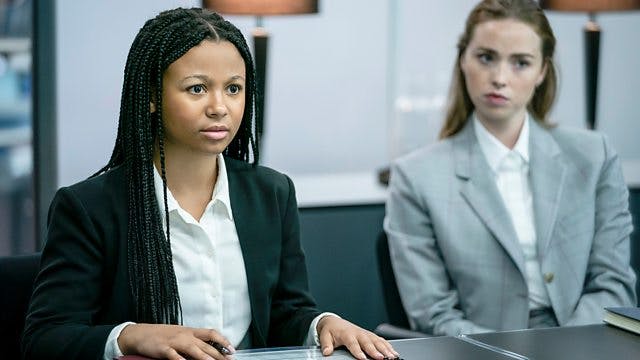 This show is very good at keeping you interested in what is going on – to a degree. None of the people in it are particularly good people, they all have significant flaws in their personalities and no one seems to be acting for anyone but themselves. A true reflection of a generation of young adults entering into a dog-eat-dog workforce. Even Harper, who seems to be our protagonist has her own agenda in almost every scenario. The girls take centre stage in this episode. Yasmin seems to enjoy manipulating 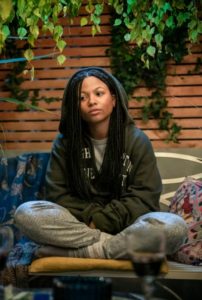 people, likely stemming from her own insecurities around her own life. She was probably very popular at school and has had quite an entitled upbringing that when thrust into the real world and people aren’t falling at her feet and giving her everything she wants, she feels the need to regain control by manipulating people around her. She has forged a way for herself by doing coffee and lunch runs, sending explicit photos to co-workers and as a result of her desperate attempts of being liked, she isn’t taken seriously by anyone who she works with.  She starts with Harper, who unlike Yasmin has actually made significant progress at Pierpoint and is steadily impressing her mentor, Eric. However, in a rather catty exchange in a meeting that Yasmin had no business being in, it’s easy to see that Yasmin is attempting to assert herself over Harper.  Another who is finding Harper a threat is her line manager Daria who gives Harper a menial task while she knows Ken has asked her to work on a pitch idea. She does seem to want to help Harper though as she invites her to meet with her best client, but Harper has already agreed to do something for Eric. Does she have to decide who to help? Eric or Daria? Or, should she go to the pre-arranged dinner party Yasmin is throwing for Harper to get her teeth into the affable Greg, who has about as much sexual charisma as a toilet brush.

On the other hand, we have the boys, who are playing a wholly different game. Gus has been moved onto Clement’s team with Robert, who like Yasmin is desperate to be seen. Clement, with his outdated ways and old world views, seems to have a personality clash with Gus. At a boozy dinner with a client and his assistant, Clement leaves the boys and the assistant for some illicit female company. The three of them then go to ‘Sweat Prom’ which is basically a high-octane night club. Gus leaves the party early for a late-night romp with his closeted gay lover, Theo. 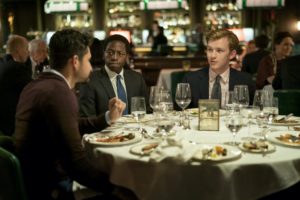 It is difficult to see where this is all headed. Harper isn’t making any friends and is really just focusing on staying on Eric’s good side but remember, she is there unlawfully after forging her college manuscript. Apart from a little flirting with the boys, she doesn’t interact much with her colleagues in anything more than a professional way. She stood up for Yasmin in the restaurant the week before, but was that for Yasmin’s sake? Or was it to show Eric she has the backbone he accused her of lacking earlier in the day? The episodes play out like a soap opera, weaving in and out of the lives of these bright young things transitioning from privileged education into the real world. This part of any person’s life is going to be full of challenges as you figure out who you are as a person and who you want to become. Harper fits right in at Pierpoint, as does Gus. But Yasmin and Robert seem like they have fallen down a rabbit hole and are just trying to make it seem like they’re happy in their choices.