Where Lena Dunham’s pilot did exceptionally well to establish meaning and urgency amongst an array of core characters in a professional world that is, at times, indecipherable (think The Big Short/Margin Call), it was anchored by a common tragedy that affected each and every one of them.

Ironically, the second episode, of the two, feels more like a corporate evolution of Girls than the one directed by the aforementioned’s showrunner. Where the pilot placed the characters in the world and onto your radar, ‘Quiet and Nice’ takes place predominantly ‘off-desk’ and opens the characters up in more personal settings. Now two episodes deep, what is immediately striking about how Industry is written, is that it manages, almost effortlessly, to offer the central characters equal screen time, whilst simultaneously maintaining episodic focus on one character at a time. If the pilot belonged to Harper (and it really did), then this week’s chapter is owned by Yasmin (Marisa Abela, pictured), who you’d be forgiven for thinking was someone’s PA when, as it turns out, is a trading desk graduate in competition for permanence like all of our other core kids. 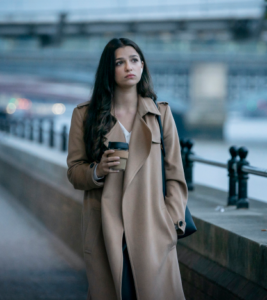 What’s most impressive about this misjudgment by the viewer, is that her early presence was clearly written that way with intent so as to serve the episode that follows. There is a genius in this subtlety, it has to be said. And if every episode continues the pattern of a rotating character focus that equally orchestrates a perspective shift, then Industry may well anchor itself as one of this year’s very best shows. It is, after all, a co-production by HBO and the BBC – a combo which rarely fails (we’re looking at you, His Dark Materials).

Also ballsy and to great effect is the way that last week’s two key narrative bombshells are largely unmentioned. Harri’s death is predictably managed through the system without time for reflection, while Harper’s university transcript indiscretion, and any repercussions to follow, are put on pause as we take time to learn more about Yasmin and the varying mentor/graduate relationships that can forge, or not, at Pierpoint.

While Yasmin who, for all intents and purposes, comes across as confident if by-the-book, it was clear from the outset that she doesn’t (yet) possess the same cutting edge that Harper has already shown – pitching and closing in week one. Where Harper’s place feels safe, Yasmin hasn’t really moved past the fetching-coffee-and-lunch phase of her initiation. For all we know, she may harness the same skillset as any number of graduates who have entered the program at the same time. Whether or not she even gets the sniff of an opportunity is down to her desk VP, Kenny – a despicable Scot who, although responsible for her hire, clearly has no intent on developing her beyond the lunch run. His treatment of her – in work and out – is reprehensible. It’s clear that he gets off on humiliating her, which ultimately leads to his dismissal from a company dinner by hero MD, Eric Tao, who continues to be played by a barnstorming Ken Leung. In this environment, however, money talks. It will be intriguing to see how far this toxic day-to-day is allowed to progress before action, if any, is taken to protect Yasmin’s wellbeing. 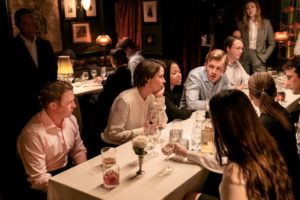 In contrast, Eric continues to bond with Harper, who he invites to be present in an impromptu showdown with one of his hedge fund clients who, apparently, is seeking to sidestep Eric and begin work with a rival manager, Hilary – a fresh introduction this week, and one who comically cannot refrain from talking about soccer. This interaction does well to humanize Eric further and demonstrates his willingness to let his professional guard down in front of his graduate. What it does even better, is suggest that though pitch-perfect on the trading floor, Eric may have underlying personal problems. Do we need to know more about this? Maybe. Maybe not. But that’s kind of the point. As viewers, we live inside the Pierpoint building, it’s graduate dorms and surrounding bars. Everything else is only as important as its impact as what we see within the bubble. 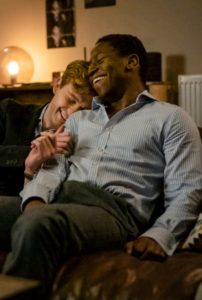 Elsewhere, Gus continues to be awesome. Though his relationship with Theo (who saw that ‘coming’?) is made needlessly complex by the fact that the latter is in a heterosexual relationship as a matter of priority, what’s even more pressing is the threat of being restructured into an unfavorable department on the back of Harri’s death. As we learn that his team is being dispersed, Gus takes it upon himself to challenge Sara’s decision with the utmost frankness in entirely the wrong setting. For all his admirable self-assuredness, this may have taken it a bit too far. Whether his skillset besets his candor, we will have to see.

Beyond Eric’s apparent personality flaws and Theo and Gus’ passionate secret, more reveals come in the form of Harper sharing a vague story regarding the disappearance of her twin brother years before. Who is she – indeed.

The plot continues to thicken without there really being a clear plot. It’s continually fascinating to watch as these relationships develop against such an unknown quantity of a backdrop. And what’s more, it’s unbingeable!

Industry continues on Mondays on HBO at 10PM EST.