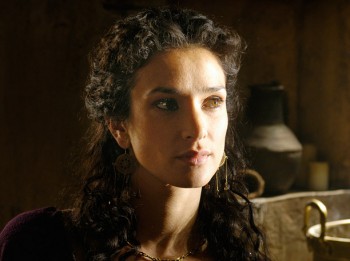 Finally more casting news! According to James Hibberd of EW, English actress Indira Varma has been cast in the role of Ellaria Sand. Ellaria is the paramour of Oberyn Martell, the Red Viper of Dorne, who was recently announced to be portrayed by Pedro Pascal.

Varma should be familiar to loyal HBO fans, as she portrayed Niobe, the wife of Lucius Vorenus, in Rome. She is also well known in the UK for portraying John Luther’s estranged wife Zoe in BBC’s Luther.

This great news comes at a time of disappointment for many fans, after no concrete news was revealed by the Game of Thrones producers at this year’s San Diego Comic-Con.

Author’s Note: I had hoped for Indira to be cast as Ellaria all along, and actually called it in the comments section of a previous post. Honestly, I’m both in disbelief and delight at this casting. Varma certainly has both the acting skills and beauty to pull off this role brilliantly. Also, since we’re on the topic of Rome alumni, would it be too much to ask for Kevin McKidd to play Jon Connington, Ray Stevenson to play Victarion Greyjoy, and James Purefoy to play Euron Greyjoy?