In our second week of therapy, Dr. Brooke Taylor asks her patients:  “What are your expectations of these therapy sessions?”  Despite all providing different answers, the patients share the same ambivalence about their futures.

Eladio’s insomnia has yet to be curtailed. The young man is receptive of Dr. Taylor’s help, yet remains frustrated with the notion that his therapist is not able to prescribe medication without a medication manager or psychiatrist. Taylor deduces that Eladio has been acquiring prescription sleeping pills illegally. We learn that the young man was provided the pills by a friend. 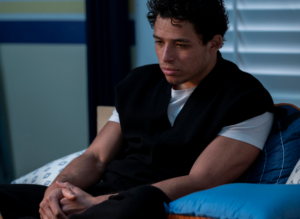 Eladio is the most open patient of Taylor’s, and the most receptive to counseling. Yet his expectations of Taylor and her methods are an issue; resulting in him indirectly blaming Taylor for the increased frequency of nightmares. The true source of Eladio’s fears is his commitment to the De Marco family; the owners of the beautiful estate where he currently resides. Eladio fears that his efforts are not good enough for the De Marco’s wheelchair-bound son, despite being heavily praised by the family. This patient has finally found something he excels at, but it requires his perpetual presence in a household that he has no other prior history.

The doorbell rings, signaling that Taylor’s next client has arrived for treatment. The reaction that we get from Eladio is profound. He is honored to have a therapist that is so committed to his plight, yet is vexed that Taylor was not keeping up with the time, resulting in the expelling of emotions that cannot be addressed until the next session. The bill for the session is being footed by the De Marco family, and it is certain that we will learn more about Eladio’s employers in the next episode/session.

We hear Colin’s presence before he breaks the threshold of Taylor’s residence/office. Reggae music blasts from Colin’s SUV as an amused and slightly bewildered Taylor observes from the transom window of her front door. As stated in last week’s review, Colin’s mental state is the most mysterious of the patients. Adding to the mystery is the synergy between Colin and Dr. Taylor. Moments into the session, Dr. Taylor has a back spasm.  The incident prompts the two to swap seats, and Colin comically takes over as the therapist. The moment is humorous, yet brilliant for this is another ploy for Colin to deflect questioning. 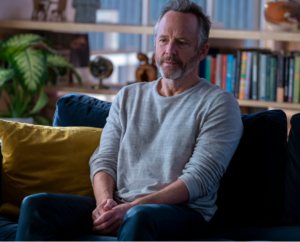 We learn that Colin’s anger comes from what he believes to be being misunderstood by everyone that crosses his path. He has spit in a female correctional officer’s face while incarcerated. When a vocal critic of white-collar crime discovers this infraction, they write a scathing article. Colin is further vexed by this scrutiny, yet Dr. Taylor reminds him that he chose to commit a crime. Colin yearns to be a victim rather than a perpetrator.

Often white-collar criminals are given what can be seen as a sabbatical at a low-security penitentiary. Colin believes that his punishment is justified, but also wants his critics to know that he is being properly punished. With these sessions being an assessment for the courts, rather than conventional therapy sessions, Colin is simply seeking to get a good report from Taylor.

The verbal banter Colin does with Taylor and the avoidance of anything resembling real insight would wear thin over time. This makes him the most challenging patient, albeit his stay is rather short (he is only court-ordered four sessions) unless he decides to seek treatment on his own time and dime. 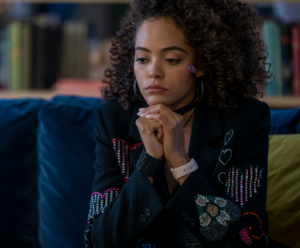 Just before Laila’s arrival, Taylor ignores a call from Dr. Weston, and puts away a cabinet full of alcohol. Addiction was a problem that Weston battled during the third season of this series, but his battle was with sleeping pills.

Brooke’s distrustful, teenage client struggles to carve out her own identity separate from her family’s overbearing expectations. The cause of Laila’s identity issues is easy to identify, yet hard to treat. How does one tell a client’s family that they (particularly the grandmother) are the source of her pain?

Thus far, Laila appears to be a caricature of a young troubled black woman, rather than a fully fleshed-out character.  When Laila shares a dream with her therapist, the description is not as personal and vivid as Eladio’s dream or Colin’s long-winded rants. More insight into the one person that makes Laila happy, her girlfriend, would add more depth to Laila’s story arc.

Since the death of her father, we see that our doctor is afraid of death, for she is the last known lineage of her family. Taylor’s coping mechanism is an alarming level of alcohol consumption. She ridicules her friend, Rita for being overbearing about her drinking, and accuses her boyfriend, Adam, of being too lenient.  Taylor profoundly tells Rita that she has nobody left to resent or to love, besides Adam.

Adam is Taylor’s hope to eradicate or at the very least, make her content with her past. Her abortion and being the last living member of her immediate family can be turned around by having a baby with Adam. She believes that giving birth will free her from seeking forgiveness from her unborn child.

So, we have Eladio wanting a mother and Laila without a mother and Brooke struggling with the loss of her father and longing to find her son — a potent brew indeed. As she did with Colin, Brooke sits on the couch and Rita sits in one of the chairs, reflecting perhaps on the way the two are relating, more as therapist and patient than as friends. 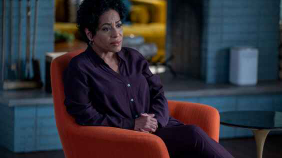 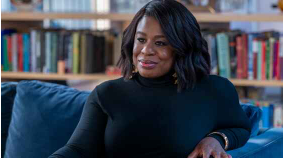 The third week of therapy is now in session on HBO.  Our diagnosis will follow shortly. Stay with us.