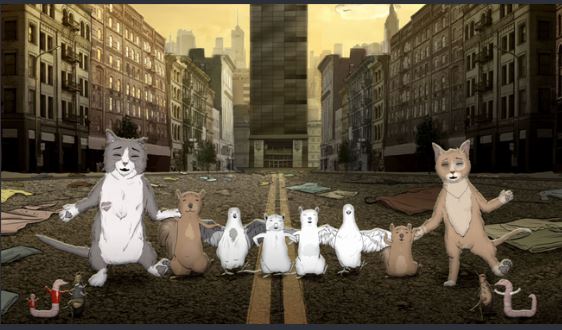 We know that not everyone catches every little bit of HBO’s content. We know that the big Sunday night lineup is the most watched timeframe. But sometimes it is fun to explore the other content also. That is why in this post we draw your attention to ANIMALS. Have you been watching?

It is an animated series, now in its second season that airs Friday nights at 11:30pm. It sheds a light on all the travails, joys and woes that face the denizens of New York City; except the denizens under examination are pigeons, rats, flies, horses, cockroaches and the other non-human inhabitants of the city. What do you know, they got the same issues as we humans do.

Just for fun here in a look back at Season One.

–Episode 1: Rats in which a misguided rat gets mating tips from a friend at a subterranean party, though an offer of a little blue pill has disastrous results. Plus, a pair of police horses complain about an old acquaintance, Greg, who’s made it big as a thoroughbred racing horse and a bedbug faces a midlife crisis and gets an earring.

–Episode 2: Pigeons in which a naive male pigeon prepares himself for single motherhood. Meanwhile, his friend is challenged to a flying race to “the green lady with the ice cream thing” by a bullheaded New Jersey rival and one caterpillar’s metamorphosis is another’s lament.

–Episode 3: Cats in which two privileged indoor feline siblings find their perfect day interrupted by a crafty alley cat. Also, bored with the monotony of his life, a goose sets off on his own and attempts to bond with a flock of Central Park swans. 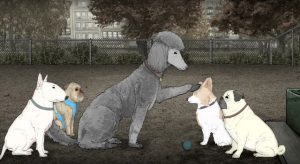 –Episode 4: Dogs in which a Papillon is thrust into an unwelcoming dog park, a dog-walking group deal with an unexpected secret and two dogs dissect their owners’ first date.

–Episode 5: Rats in which a rat invents pants, a moth tries neon light for the first time and two aquarium fish couples have a tense dinner.

–Episode 6: Pigeons in which Pigeon Phil runs into trouble after he’s reunited with the dad who abandoned him, while pigeon Mike struggles to encourage his son to be a Seagull Scout. Also, two turtles come to blows over the love of a mechanical frog and a skunk learns the unfortunate truth about his date’s past.

–Episode 7: Flies in which a pair of flies experience the highs and lows of life, finding success, failure, love and loss over the course of just a few hours. Plus, A self-conscious carriage horse is encouraged to “let it out” by a peer.

–Episode 8: Squirrels Part I in which, after their home collapsed, two young squirrel brothers find their survival skills tested on a journey through a tree trunk towards freedom, meeting rodent friends and foes along with the way. Also, a snake and her mouse prey face off and puppies at a pet store settle a turf war.

–Episode 9: Squirrels Part II which sees the conclusion of squirrels Phil, Mike and April’s treacherous journey out of their collapsed tree home. Also, a queen ant reunites with an old friend and learns what her colony really thinks of her. 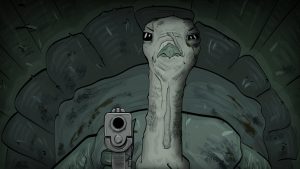 –Episode 10: Turkeys in which, after his wife is taken from him, a turkey seeks revenge on The Mayor during the Thanksgiving parade. Plus, two rat teens venture out of the sewer and discover the joys and horrors of life aboveground.

Though the vignettes in the series can hold up as stand-episodes there is a vague recurring theme throughout. Season One had political corruption prevalent as a human mayor wreaks havoc causing a turkey to kill him in the end. (see Episode 10 above) In the sophomore season, the recurring theme is a plague hitting the city. Thus, we have lab rats in testing, exterminators after the roaches and the pigeons & squirrels feeling the effects of a city quarantine. We even have an episode with the human animal of the city except for this time around they are not animated but live-action!

So what are you waiting for? This series, even though it utilizes low-key animation, is amusing, witty and even touching at times. As of this post, there is still a few episodes left in the season as we see how the city and its citizens of all kinds face their dilemma. Check it out Friday nights at 1:30pm or better yet get on over to HBONow/Go and binge ANIMALS. It will be a treat.