Armando Iannucci, creator and one-time showrunner of the award-winning VEEP, stepped away from that show a couple of years ago to create other projects and stay closer to home in the U. K. One of those works is AVENUE 5,  a project we mentioned before. He now has a lead attached in Hugh Laurie and it is an exciting casting for sure. 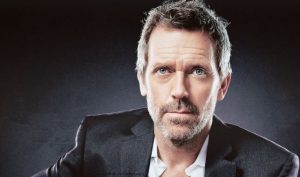 As cited AVENUE 5 is a space adventure sometime in the future. Hugh Laurie is set to play Ryan Clark, the charming and in-control American captain of Avenue 5. There has been a long line of famous starship captains on TV encountering all types of aliens & planets. Also common in those encounters has been plenty of political intrigue and tension. Now, imagine Iannucci’s touch to that intrigue and imagine it coming out past that snarky smirk of Laurie’s? Yes, it sounds like great fun, doesn’t it?

We are certainly looking forward to these two gentlemen being in cahoots again as this project moves forward. Of course, Hugh Laurie did a stint on VEEP, as Senator Tom James, a charming senator who aspired for higher office and took it out from under Selina Myers. Laurie was on for season 4 and 5 and Iannucci left between those two seasons. Laurie has also since appeared in Iannucci’s yet to be released movie The Personal History of David Copperfield. Now we eagerly wait for AVENUE 5. A pilot and scripts have been ordered, but no strong commitment has been made yet.

Joining Hugh Laurie in the pilot is Suzy Nakamura who has appeared in several comedies but most notably in ABC’s Dr. Ken and Black-ish, She even appeared in Season 4 of VEEP. In the story that is AVENUE 5 she plays Iris Kimura, right-hand to the billionaire owner of the company behind the Avenue 5. So a big corporation owns the star fleet or this one lone vessel as opposed to the government? These brief descriptions of characters make us curious as to the world they inhabit. We hope that more news about AVENUE 5 comes forth soon and we hope it comes to series on HBO.