We have all kind of done our on style of begging and wishing over David Milch’s DEADWOOD to return after hastily being taken off the air after its 2006 season. Here it is almost ten years later (its last episode aired 08.27.06) and we are still waiting for anything, a big screen movie, a TV movie, a limited series to continue the story that ended too soon. Ideally, of course, we want all the original players to return. Even though they have successfully moved on we would still what the likes of Timothy Olyphant, Powers Boothe, John Hawkes, Molly Parker, Kim Dickens, Paula Malcomson and all the rest to return.

And the show certainly would not be the same without Ian McShane as Al Swearengen. Earlier this summer Mr. McShane, recently of GAME OF THRONES, mentioned his willingness to play 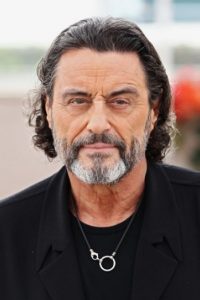 “Of course I’d love to reprise that,” McShane says. “How could one not, when it was snatched away rather unjustly by a combination of forces we’ll never know about – hubris or money or whatever. But [Deadwood] certainly finished too early. At the time, most of us working on the show were incredulous. It’s been announced by HBO so its not like I’m saying it. I know for a fact David is working on the script. It’s been 10 years since it finished. [Star Timothy Olyphant’s] free from Justified. I’m hoping they’ll make the deal soon, for two or four hours, whatever they decide on. It was a very close knit group of actors on it. We got along very well. I’m sure David will decide to set it 10 years later, after the great fire or whatever happened in Deadwood. They haven’t done the deal yet. They [were planning] to do it late this year or early next year.”

Now we have talked about DEADWOOD before. In fact, we had hopes for a movie just back in this post at the start of the year. The atmosphere at HBO has changed with Bloys now at the helm of programming. Do you think he can finally get Milch to finish off a script? Do you think they can get enough of the original cast together to still make it work? We, and it seems McShane seem to still hope so. Obviously we will be all over it if it ever comes to be.