Joffrey, or Joff as I like to call him is 15, a product of incest, unpredictable and one of the best villains on television currently.

Gleeson is doing something right when he can enrage millions of fans with one smirk. And oh boy do people love to complain about him. Type “Joffery” in Twitter during an episode of Game of Throne and the moment he steps on screen you will see many creative writing majors putting their degree to use explaining  their dislike.  But, there is a reason behind his smirk and it can easily be overlooked when he’s sadistically making one drink their fill.

I have to be honest, I like the kid. The more evil he becomes and the less hope those close to him have only makes me like him more.

Also those zingers, whew! The Lannisters know how burn with words. I couldn’t help but sprinkle in some choice Joff zings in this post. They should start calling the show “Game of Owns” any time Joffery is featured.

Seriously though, we want to see order and justice on television. We want it from our news to our basic sitcoms. In Game of Thrones the judge, jury, and executioner is in dirty hands. It’s something we rarely see executed so devilishly well on television.

“Everyone is mine to torment,” — Joffrey Baratheon

He is the epitome of a spoiled, neglected child.  His father — Robert Baratheon (Mark Addy) — cares little to nothing for Joffrey unless he is fetching him another goblet of wine or stretching his breastplate. 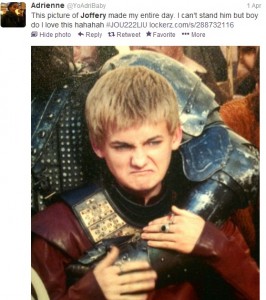 Joffrey has spent his entire life looking for his affection.This is a common theme with Joffrey. As heir to the throne, Joffrey wants his father to see his strength.

His father never taught him how to rule by example rather than fear. From a young age Joffrey discovers this as a powerful manipulator. The butcher’s boy in Winterfell met Joffrey being Joffrey and that’s when we are introduced to the soon-to-be-king.  He scares the butcher’s kid to death and Joffery only gets more manipulative.

All of Joffrey’s cruel and malicious acts build fear. People are forced to take his actions seriously when he sees no harm in a little bodily dismemberment.

“Tell me, do you favor your fingers or your tongue?” — Joffrey Baratheon

Joffrey takes solace in dishing out orders for blood instead of reason.

When his mother Cersei Baratheon (Lena Headey) offers strict guidance he threatens to have her killed. If you look at the way Robert treats Cersei it’s no wonder Joffrey sees nothing in his mother claims. Robert ignored her in favor of other female conquests. In Joffrey’s mind, in order to achieve his father’s greatness do as the King does.

“We’ve had vicious kings, and we’ve had idiot kings…but I don’t know if we’ve ever been cursed with a vicious idiot for a king,” — Tyrion Lannister (Peter Dinklage)

What if Joffrey turned out to be different though? Scary, right? Sometimes I have nightmare about Joffery holding a My Little Pony plushie instead of crossbow. Sorry to put that image into your head but,  I think Joffery would turn out a little like fan favorite, Jon Snow (Kit Harington).  Both characters are bastards except one major thing sets them apart. Jon was raised by a loving father, Eddard Stark (Sean Bean) and you can see a lot of of Eddard in Jon.

Noble, courageous and a fighter; features that Ned and Jon possess. Jon’s working on the facial hair but I have faith he’ll get to Ned’s beard-status soon. Joffrey on the other hand shows none of his father’s redeemable qualities. Not even Robert’s love of wine. Come on Joff! Meet me half way and develop an appreciation for wine-coolers or light beer at the very least. Your sadistic ego trips would taste so much better with a full goblet in your hand.

Blame it on the incest or blame it on daddy issues but the fact of the matter is, Joffrey is hell-in-a-hand-basket and ain’t no one got time to show that boy any affection. Now all of Westeros is seeing the faults of Robert’s-below-average-parenting after his death.

Jack Gleeson, I might not be first to say this but I’m in the minority; keep doing what you are doing and I promise if I meet you we can hug it out, Entourage style.

I’m not saying you have to like Joffrey, but I am saying he’s a hollow character created to anger the masses and I think he performs that job very well.  If you think he is as bad as they come, you know nothing of Westeros.

Have an opinion on Joffrey? Want to start a Joffrey fan club with me? Perhaps a douchey hunting club? Let us know in the comments below.