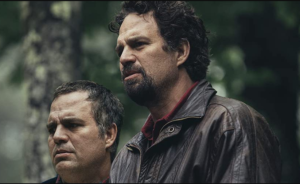 With serious television, comes serious subjects. Chernobyl explored one of the worst man-made disasters in human history. Big Little Lies explored how domestic violence led a group of women to seek vengeance, which brought forth ramifications equally as bad as the spousal abuse. Sharp Objects explored the parallel roads of fighting personal battles and fighting the external evils of society. HBO’s adaptation of the 1998 novel I Know This Much Is True by Wally Lamb, explores unaddressed childhood issues and depression.  The first two episodes are amongst the bleakest stories this reviewer has ever experienced.

Meet Dominick Birdsey and Thomas Birdsey (both played amazingly by Mark Ruffalo), identical twins born on December 31, 1959, and January 1, 1960 respectively. Their births were heavily covered by the media in the small Connecticut town Three Rivers. Dominick, who serves as the narrator (and perhaps an unreliable narrator), explains in a voiceover that being a New Year baby is nothing special. It merely means one was born on the first day of the New Year and will not bear any special advantages in life to said persons. Dominick is presented as the more developed of the twins, as Thomas suffers from paranoid schizophrenia. In an effective yet unsettling scene, Thomas severs his hand inside of a public library. He quoted Bible scriptures while library patrons looked in terror of the impromptu surgical procedure, an event that Thomas later proclaims was done in protest of the Gulf War. Mental illness has always been a thorn in the side of mankind, and for the Birdsey twins, we get a sense that their childhood was the breeding ground for Thomas’s ordeal. The boys were raised by mother and stepfather. Mama does not like to talk to either boy about their biological father and is very submissive to the overbearing stepfather. Although very stern toward both Dominick and Thomas, Thomas bears most of the man’s unnecessary wrath He just does not know when to disengage in activities and talk that vexes the abuser.

After Dominick received word of his brother’s breakdown, he rushes to the hospital to encounter his brother’s opposition to the doctor’s reattaching his hand.  Against Thomas’s wishes, Dominick signs the consent form for surgeons to reattach Thomas’s hand.  Due to the chaos that ensues between Thomas and the medical staff, the critical time to reattach the body part expires. Thomas is now without a hand. 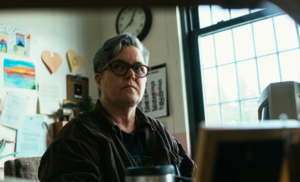 The second episode gives insight into Dominick’s turmoil. He may not suffer from diagnosable issues akin to Thomas’s, however, the issues are there, nevertheless. He is divorced, in a relationship with a leeching girlfriend, and highly dismissive of some of his brother’s actions. Dominick and Thomas undoubtedly love each other, but it may not entirely unconditional. In sessions with Thomas’s psychiatrist (played by Rosie O’Donnell)’, it is revealed that Thomas admires Dominick’s fortitude and intelligence. However, Thomas feels like a burden to his twin. In a near tear-jerking flashback, we find out Dominick and his wife at the time lost a child. At the funeral, Thomas goes off on a tangent about an unrelated topic, and Dominick scolds him at the repass, for making a situation about himself, on the day a child is being laid to rest.  Dominick is further vexed when Thomas reveals information about their stepfather. Dominick concurs that the man was abusive, but vehemently denies some of Thomas’s accounts.

I am acutely aware that I have not typed anything positive happening to the characters in I Know This Much Is True.  Even with a situation as dire a Chernobyl, there was hope on the horizon.  I Know This Much Is True is finely acted and directed. The teleplays are effective yet so mood dampening. Let’s hope for some positive outcomes for the Birdsey twins.