If you’re reading this you’re probably wondering “how can I stream True Blood online?”  Maybe you don’t have a traditional TV or you just want to enjoy your favorite Bon Temps characters on the go.  No matter your technological preference there are several options for finding True Blood episodes on the web.  We should preface this by saying that you cannot watch HBO shows online (legally at least) without paying someone at some point.  Whether that’s a streaming service, DVD provider or HBO itself you’ll most likely always need a subscription or payment of some kind to access the world’s best content.

Let’s go through a few of them and you can choose what works and what doesn’t:

These days people, especially the younger generations, are moving away from cable and picking up subscriptions to slimmer packages of their favorite cable channels. Sling is one of the first and also one of the cheapest ($25 a month) to offer channels such as HBO (and True Blood, in turn) in a bundle.  There’s a 7-Day free trial too so Sling doesn’t give you a reason not to give it a try.

Already used your 7 day free trial for Sling and want more? AT&T TV NOW also has the same sort of channel lineup and you can even add HBO for only $5 to your package. It’s actually the easiest way to watch True Blood is you’re already an AT&T customer. They offer serious discounts if that’s the case:

UPDATE: AT&T TV NOW is offering a $25 per month discount on the service for anyone who has AT&T Unlimited . They’re also throwing in HBO for free which is pretty amazing. This is the best deal in town, folks.

Is True Blood on Netflix?  How about Hulu?

We wanted to get this one out of the way first thing.  You probably won’t see any of HBO’s programs, including True Blood on a streaming service like Netflix or Hulu any time soon.  This is due to the, for lack of a better word, contemptuous relationship the two companies have with one another.  As they both evolve as networks and content producers they end up encroaching on one another’s territory.  We’ve spoken to this precise issue once or twice.  But for now and for the foreseeable future you will NOT be able to stream True Blood on Netflix or Hulu.

There are several services offering pay per episode download systems.  Luckily True Blood is available on most of them!  First up: Google Play.  Episodes are about 3 bucks each or you can get a bit of a break at 35 bucks per season.  The same sort of system is available on Amazon Instant Video as well though the prices look to be a bit higher.  Check it out anyway as there may be benefits at some level for Prime subscribers.  Last up in this category would be trusty old iTunes.  Prices per episode seem to be a bit higher at 3.50 but the full season might be a bit cheaper.  Prices are subject to change so be sure to check them all out if you’re in the market. 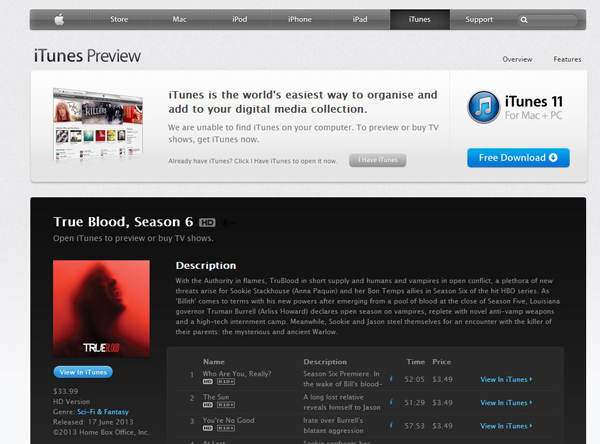 Release dates for new seasons my vary so you’ll have to do a search to be sure you’re up to date.  All in all this could be a viable option for those not wanting to purchase the DVD or Blu-Ray discs and don’t have HBO Go.

If you’re an Amazon Prime member and you’re trying to watch an older HBO show like The Sopranos or Sex and the City stop what you’re doing and head over there now because older HBO shows stream free with a Prime subscription. True Blood is streaming there in its entirety. Use the banner below to get there or sign up for a free month.

You get a free month when you sign up so there’s really no excuse not to when you factor in the free shipping on Amazon stuff as well as the large streaming video library. Give it a try.

This is really the way to go.  You’ll need an HBO subscription but once you’ve got that you’ll get access to the HBO Go app.  With the app you’ll be able to watch anything ever made (well most things anyway!) by HBO on the go, at home, on your computer, on your phone etc.  All free with your normal HBO subscription.  This obviously includes True Blood, of course.  Learn more about using the HBOGo app here as we keep a nice list of devices that it’s available on.

If you have the option to use an HBO Go app to watch True Blood Online – You’re set!  Here’s a direct link to those watching via browser.

If all of the above just doesn’t work for you for whatever reason we’d recommend waiting for the DVD and Blu-Ray releases of True Blood seasons as they’re released.  We review each of them so take a look and grab the older ones or the entire Blu-Ray set on Amazon!

One advantage here is that you’ll get special features that you won’t find anywhere else.  True fans of True Blood probably go for this method of access.  Oh and they even come with Digital Downloads/Access so you’re getting both online and offline HD versions of the series!  Not bad if you’re a fan of “owning” shows for sharing.

We hope this little guide to watching True Blood online has helped a few of you.  We know it can be tempting to pirate and/or steal shows that are a little bit more difficult to obtain than non-premium shows.  But keep in mind that the show producers and actors work hard to bring you their very best work.  This is how that work is supported.

Ultimately it’s up to you which method above you choose to get your True Blood fix!