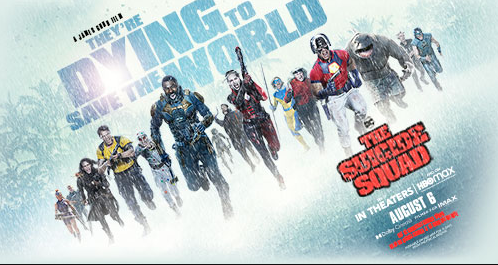 Now it is James Gunn’s turn! Warner Bros. was hoping for a return of this super team-up but it didn’t fall into place until Gunn was ousted by Disney. He is back at Disney but not before he channeled Harley Quinn, Bloodsport and the rest into this feature. The main cast forces you to look twice:  David Dastmalchian as Polka-Dot Man, Jon Cena as Peacemaker, Jai Courtney as Captain Boomerang, Joaquín Cosío as Suarez, Nathan Fillion as T.D.K., Joel Kinnaman as Rick Flag, Michael Rooker as Savant, Mayling Ng as Mongal, Flula Borg as Javelin, Sean Gunn as Weasel, Juan Diego Botto as Silvio Luna, Pete Davidson as Blackguard, TaikaWaititi as the first Ratcatcher, Daniela Melchior as Ratcatcher 2, Peter Capaldi as Thinker, Julio Ruiz as Milton and Idris Elba as Bloodsport & Margo Robbie as Quinn. Plus add characters like  Nanaue/King Shark (voiced by Sylvester Stallone),  This movie is the latest WarnerMedia Same-Day Premiere. The movie opened in available cinemas on Thursday, August 05, 2021 and uploaded to HBO Max the same day. The only catch is the movie appears for a limited time on the streaming service. It runs through Sptember 06, 2021. You might say that there is another catch; how do I watch this flick in the safety of my own home? Answer – you’ll need to subscribe to HBO Max.  That’s right, check out the latest deals and subscribe now.

Where to Stream “The Suicide Squad” Online

There was once a time when HBO didn’t have a streaming service of its own. But today we have HBO Max, one of the most advanced streaming services on the market that not only gives you access to HBO’s entire catalog from the past years, but adds new movies, series, and specials of its own plus an endless stream of entertainment options from other properties in the Warner family, like TCM, TBS, TNT, Cartoon Network and the  DC Universe. The best way to watch “Space Jam: A New Legacy” and more online is to grab an HBOMax subscription for about fifteen bucks a month, or you can sign up for six months and get a better deal. The Same Day Premieres are not a part of the ad-supported version of the streamer.

When Does “The Suicide Squad” Premiere?

What is “The Suicide Squad”About?