James Wan. You’ve heard of him, right? He is an Australian film director, screenwriter, producer, and comic book writer. He has primarily worked in the horror genre as the co-creator of the Saw and Insidious franchises and the creator of The Conjuring Universe. Outside of horror, Wan directed Furious 7 (2015), the seventh installment of the Fast & Furious franchise, and the DC Extended Universe superhero film Aquaman (2018). He was also a producer on 2021’s Mortal Kombat. He has returned to the horror genre with his latest called MALIGNANT. It is the latest WarnerMedia Same-Day Premiere. The movie opened in available cinemas on Friday, September 10, 2021 and was uploaded to HBO Max the same day. The only catch is the movie appears for a limited time on the ad-free option of the streaming service. It runs through October 11, 2021. You might say that there is another catch; how do I watch this flick in the safety of my own home? Answer – you’ll need to subscribe to HBO Max.  That’s right, check out the latest deals and subscribe now.

Where to Stream “Malignant” Online

There was once a time when HBO didn’t have a streaming service of its own. But today we have HBO Max, one of the most advanced streaming services on the market that not only gives you access to HBO’s entire catalog from the past years, but adds new movies, series, and specials of its own plus an endless stream of entertainment options from other properties in the Warner family, like TCM, TBS, TNT, Cartoon Network and the  DC Universe. The best way to watch “Reminiscence” and more online is to grab an HBOMax subscription for about fifteen bucks a month, or you can sign up for six months and get a better deal. The Same Day Premieres are not a part of the ad-supported version of the streamer.

When Does “Malignant” Premiere?

What is “Malignant” About? 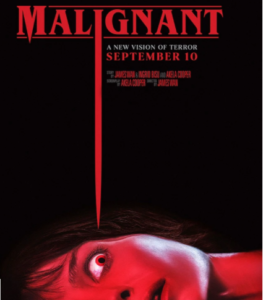 The film stars Annabelle Wallis as a woman who begins to have visions of people getting murdered, only to realize the events are happening in real life. Maddie Hasson, George Young, Michole Briana White, and Jacqueline McKenzie also star. Wallis plays Madison Lake, who suffers from violent nightmares of murder and mayhem, but what she learns is that they are suppressed memories. A psychiatric hypnotherapist is called in hoping to unlock Madison’s memories. Just what does she reveal? Something from the mind of James Wan. He created this original story with Ingrid Bisu and Akela Cooper; Cooper is credited for the screenplay.