It has landed. The long awaited return to Westeros in the form of the Targaryen dawn exploded onto HBO on Sunday night, with a host of fresh faces and a seething and simmering familiarity. What begins with curious expository voiceover lasts mere seconds before a teasing title sequence (which one can assume will bear fully in next Sunday’s second episode) passes the torch back 172 years to the newly established reign of Viserys who was chosen by his grandfather to rule as the fifth king of the Seven Kingdoms. A glancing paragraph quickly acknowledges this timeframe in context to the birth of Daenerys, and the series is unleashed. 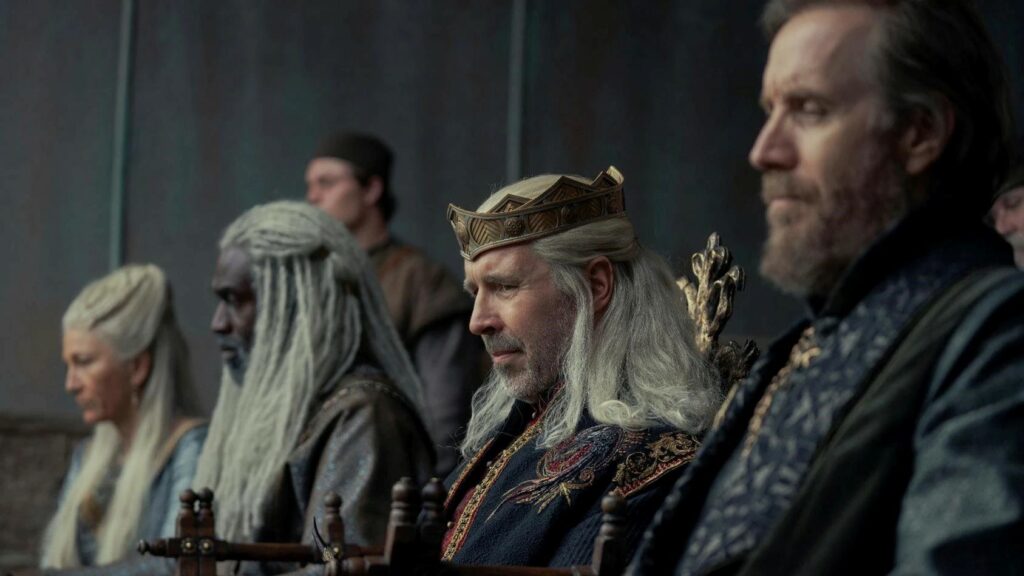 Directed by Game of Thrones alumni Miguel Sapochnik, proceedings immediately feel in safe hands. In fact, any reservations at all about Westeros being revisited can be laid to rest. Call it what they like, but this is Game of Thrones. Welcome back.

This now being the case, and of the assumption that audiences are turning up with prior favor in hand, it means that unlike the entire first season of Game of Thrones which, for all it’s dramatic fervour, was largely the establishing of person, place and reference, House of the Dragon needn’t carry such burdens. This allows the season opener to thrust itself straight into the thick of it from minute one, introducing characters as the plotting goes. 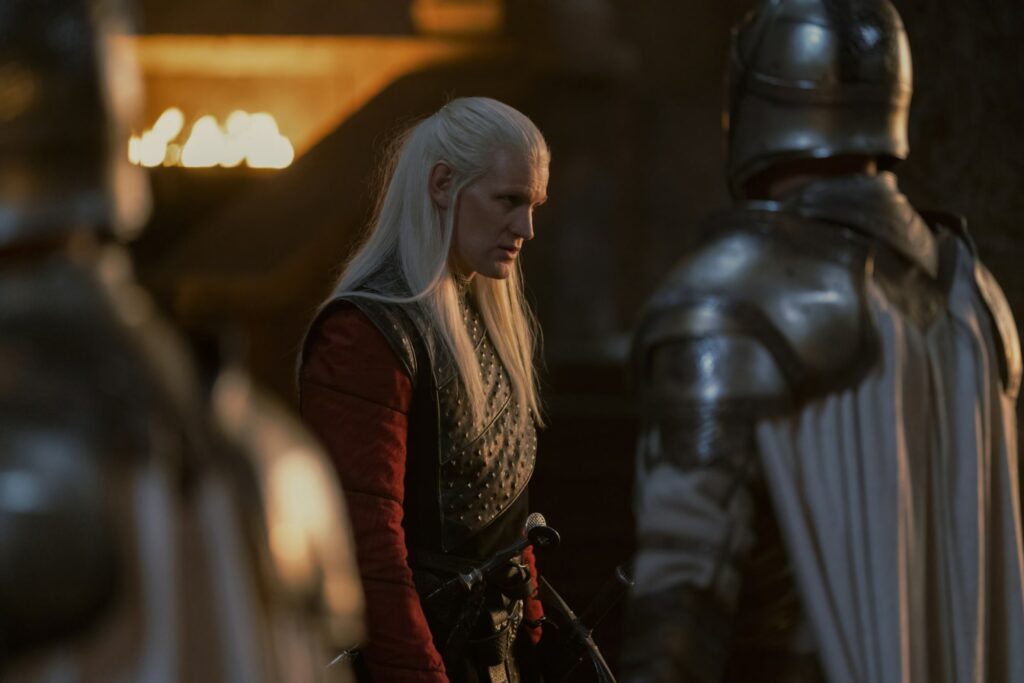 Establishing hereditary structure has always been at the core of Game of Thrones, and House of the Dragon takes no exception. Where Viserys is regarded as a good and kind king – splendidly cast in the form of Paddy Considine – he is without a straight blood heir, he is without a son. “The Heirs of the Dragon” spends it’s 60-odd minutes strategically placing the pieces on the board for what could well be an in-house civil war when all is said and done. While the Queen Consort Aemma is on the verge of giving birth, Viserys’ firstborn, Princess Rhaenyra (Emma D’Arcy) establishes a commendable claim. Regardless of birthright, if the situation calls, male or female heirs can be named. Similarly, the king has further option in the form of his younger brother Daemon (a typically devilish Matt Smith), the appointed commander of the City Watch who, in a completely over the top sequence in which he is seen to be cleaning up the streets, is evidently driven by ambition and bloodlust. And indeed, what would Game of Thrones/House of the Dragon be without it?

Similarly, council politics, of course, have their part to play. The hand of the king (Rhys Ifans) has Viserys’ trusted ear more so than members of his own extended family, while assorted members, if backseated for this first hour, will surely have their part to play, whether driven by the good of the house or by their own motivations. Again, this is all very cozy territory, and is no bad thing. Simply, further frequent evidence that House of the Dragon has no designs on trying to be something of it’s own identity, really, rather a cleverly guised continuation in the form of the past. The birth of a Targaryen new anchors the episode in genuinely shocking fashion, seamlessly edited into a powerful sequence of death antithesis – blood soaked on both ends signifying what will be typically central themes of the series. Given that Sapochnik is responsible for what were arguably some of Game of Thrones more magnificent episodes, a confident helmer to reintroduce the world at hand lays down the gauntlet for the ride ahead. It would be all too cliched to say that only time will tell if the pace can be matched in episodes to come, especially if less experienced directors are involved (they are). But, with Sapochnik returning for back-to-back episodes later in the season, and the plain, simple fact that this is HBO, and that this is firmly and uncontestedly the next phase of their tent pole, the highest likelihood is that there’s just no stopping it. Strap in.

House of the Dragon continues Sunday on HBO.