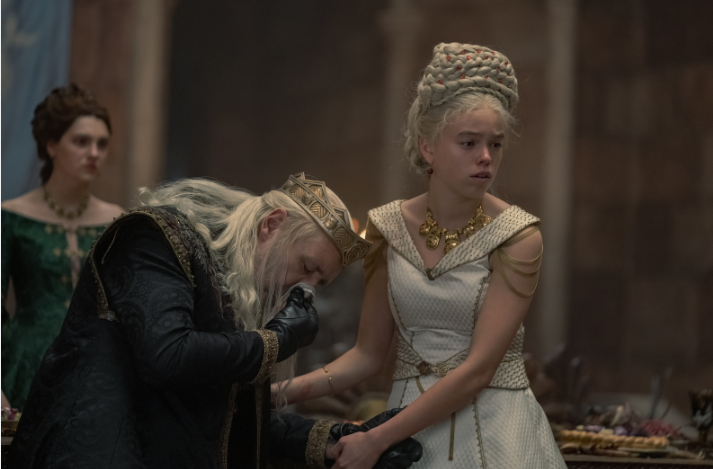 Unlike previous episodes, “We Light the Way” does not unfold after a significant time jump. Yet, King Viserys’s ailments have significantly worsened in a brief period of time. The king’s left arm could serve as a worst-case-scenario portrait in a medical textbook. His leprosy is so severe that many viewers (including myself), believed that he was suffering from ‘greyscale’, a deadly and highly contagious skin disease prevalent in the original  GAME OF THRONES series. The ailing Viserys has dismissed the conniving Otto Hightower has his ‘hand’, for Hightower wants his grandchildren to take the iron throne for House Hightower. To counteract the plot to have the iron throne rule under a name other than Targaryen, King Viserys continues his quest to find his daughter a suitable husband. The end result of this endeavor leads to bloodshed.

Despite Princess Rhaneyra’s previous objections to marriage, the King makes an arrangement with the slightly indifferent Lord Corlys Velaryo, to marry Corlys’s son. Despite the condition that the Targaryen name remains intact, Corlys happily agrees. Princess Rhaenyra and future husband Ser Laenor Velaryo have no objections, for they agree to have an open marriage. Laenor, however, is secretly gay and is in a romantic relationship with Ser Joffrey Lonmouth. The key takeaway from all the content in this paragraph is:

SUMMARY:  SHIT IS ABOUT TO HIT THE FAN 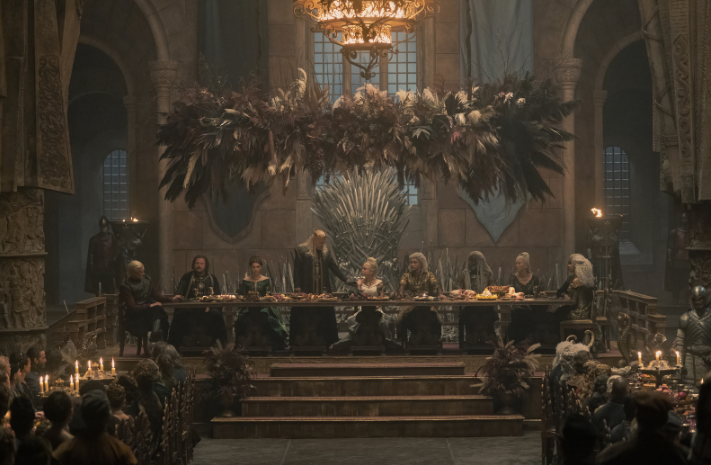 House of the Dragon has thus far excelled in honoring the pacing and intricate plot reveals that made seasons 1-5 of GAME OF THRONES so enticing; while telling its own story. The love lives of Princess Rhaneyra, Ser Joffrey, Ser Laenor, and fan favorite Ser Criston Cole turn what is meant to be a joyful (albeit politically orchestrated) occasion, into a spiritual successor to the infamous “Red Wedding”.  The body count was not as high as the previously mentioned massacre, but the outcome still hits the audience like a freight train. 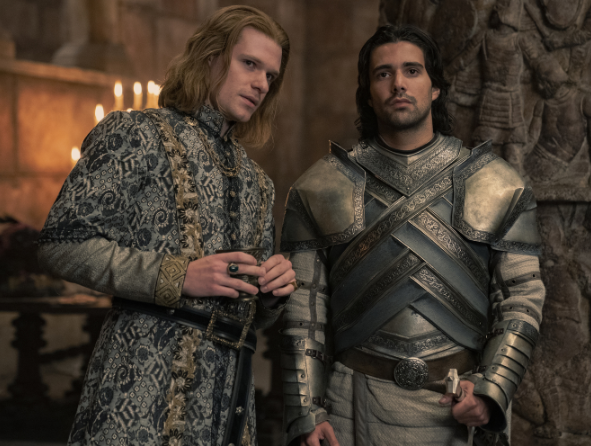 At the feast celebrating the upcoming wedding, Queen Alicent wears a striking green gown; a color that is House Hightower’s call to war. Daemon shows up in the midst of his brother’s speech, causing an awkward silence. The King allows Daemon to sit with his entourage, but the tension increases when a cousin of Daemon’s murdered wife threatens Daemon for committing the murder. Daemon in turn denies the claim and demands that his late wife’s assets be turned over to him. Although a physical altercation is avoided for this matter, Joffrey deduces that Ser Criston loves Rhaenyra. Instead of keeping this secret to himself or at the very least being tactful in revealing it, Joffrey smugly tells Criston (paraphrased) he can keep a secret if Criston can keep a secret (pictured, left). Already conflicted about breaking his knightly vows, Criston reaches a boiling point and violently beats Joffrey to death.

Rhaenyra and Laenor are wed in a private ceremony, and King Viserys collapses after the vows are exchanged. Ser Criston contemplates suicide but Queen Alicent intervenes. The dynamics of this series is quite impressive; HOUSE OF THE DRAGON is multilayered yet very easy to follow. Bravo Home Box Office, showrunners, cast, and crew.  Just keep it up!   HOUSE OF THE DRAGON returns on October 2, 2022 at 9PM ET on HBO.