It is a sign of the strength of this series that only four episodes in, there is justifiably a blood and gutless chapter that settles last week’s violent finale. “King of the Narrow Sea” takes place almost exclusively within the walls of the Red Keep, save for a brief adventure into the city after hours.

While Rhaenyra has agreed to wed, albeit on her terms, her stubbornness does not soften as returns to King’s Landing having cut short a tour of Storm’s End, rejecting all suitors presented to her. Shortly after, Daemon also returns from the Stepstones a hero, pledging his long term allegiance to Viserys. Beyond this, we are thrust into what Game of Thrones has always done best – deliver trashy drama that leans on the best-case guilty pleasure characteristics of reality show and soap opera-style relationships. 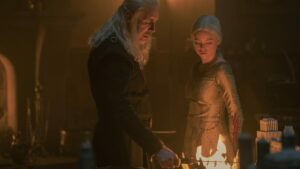 This is largely centred around Rhaenyra and her connection to just about everyone within the Red Keep, never failing to highlight her importance as heir apparent, and ultimately as yet to be seen, the show’s central driving force. This is also an opportunity to narrow some plot threads to create an intimate circle of influence around her.

Her relationship with her father continues to be strained as she remains convinced of being usurped at any moment by a preferred male continuance, and while the tension seems to have eased with regards to Alicent, there is still a stepmother/best friend/unspoken lover vibe that is inescapable, with prospect of evolution still in years to come – especially when you consider that Viserys’ curious leprosy-type rot is sure to wind him down by season’s end. What then of Alicent beyond Rhaenyra’s accession? Could they co-Queen? You certainly would not put it past House of the Dragon, if the increasingly will they-won’t they between Rhaenyra and her uncle is anything to go by. 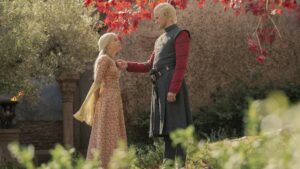 Incest is nothing new to Game of Thrones. In fact, most Earthly royal families of old have relied on some form of inbreeding to apparently strengthen their bloodlines, though perhaps not as closely aligned as uncle and niece (but hey, anything is better than brother and sister, right?) The main difference here, however, is that having seen how unhappy Rhaenyra has been, and how cold she can be to a potential partner, Daemon is narratively placed, with some conviction, as a suitable match if there was one. In fact, you’d probably be lying if you said you were entirely against the idea of them getting together.

If indeed we are in the last week or two of this current generation of central casting, Milly Alcock has been a privilege and has weighted the character perfectly. Emma D’Arcy has a tough act to follow given what we have come to expect and admire of a now firmly established character in Targaryen lore. Contrarily, while Emily Carey has been palatable as Alicent, if a bit flakey, you’d fully expect a now veteran like Olivia Cooke to step in and really add a new dynamic to her after Viserys ultimately passes on. And, obviously, Matt Smith is going nowhere which is the greatest blessing, at this point, that House of the Dragon can continue to bestow. Long live the King of the Narrow Sea.

House of the Dragon continues Sunday nights on HBO.