By now you’ve made your decision. You are either gung-ho and all-in for HOUSE OF THE DRAGON or GAME OF THRONES was satisfying enough or left you mixed feelings. We would be remiss however if we did not give you the latest from George R. R. Martin’s prequel series. We finally have some substance with a teaser albeit it only takes 1:43 to play out. In it, you will see all the key players: Paddy Considine, Matt Smith, Olivia Cooke, Emma D’Arcy, Steve Toussaint, Eve Best, Fabien Frankel, Sonoya Mizuno, and Rhys Ifans. Oh, and dragons!

Get familiar with all the characters and sear into memory the date of SUNDAY, AUGUST 21 on HBO/HBOMax.

Paddy Considine as King Viserys I Targaryen: The fifth king of the Seven Kingdoms. Known as “a warm, kind, and decent man”, Viserys was chosen by a council of lords to succeed his grandfather, Jaehaerys I Targaryen, as king.

Milly Alcock portrays young Rhaenyra Targaryen.Matt Smith as Prince Daemon Targaryen: The heir presumptive to the Iron Throne, he is the younger brother of King Viserys, grandson to King Jaehaerys, and the uncle of Princess Rhaenyra. He is also an unrivaled warrior and an experienced dragonrider.

Olivia Cooke as Lady Alicent Hightower: The daughter of Ser Otto Hightower, raised in the Red Keep and a part of the king’s inner circle. Known as the most comely woman in the Seven Kingdoms.

Steve Toussaint as Lord Corlys Velaryon: Known as the “Sea Snake”, he is the lord of House Velaryon and the most famous seafarer in Westerosi history.

Eve Best as Princess Rhaenys Velaryon: A dragonrider and wife of Lord Corlys. Known as the “Queen Who Never Was,” she was once a candidate to succeed her grandfather, King Jaehaerys, as ruler of the Seven Kingdoms, but was passed over in favor of her cousin Viserys.

Fabien Frankel as Ser Criston Cole: A skilled swordsman from the Dornish Marches, he is the common-born son of the steward to the Lord of Blackhaven.

Sonoya Mizuno as Mysaria: A foreign-born dancer who rose to become Prince Daemon’s most trusted ally.

Rhys Ifans as Ser Otto Hightower: Alicent’s father, the Hand of the King, who serves King Viserys and the realm. He is a bitter political rival of Prince Daemon. 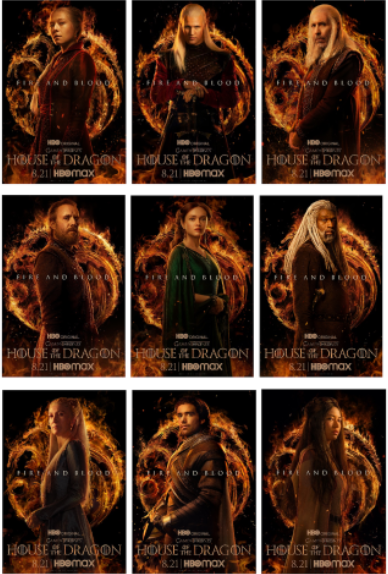 “History does not remember blood. It remembers names.” So, remember this date – August 21.