And so it begins. THE HOUSE OF THE DRAGON. The proof is in the graphics that have come to everyone’s attention. It all starts with the table read. A still on Twitter confirmed the cast is assembling. It is difficult to make out who is sitting where, not that it matters, but the cast gathered with digital copies of the script in front of them to read, perhaps for their first time, one of ten scripts that were crafted to tell the Targaryen tale. Based on George R. R. Martin’s Fire & Blood, the series was penned by Ryan Condal. He serves as co-showrunner alongside Miguel Sapochnik, who will direct the pilot and additional episodes. 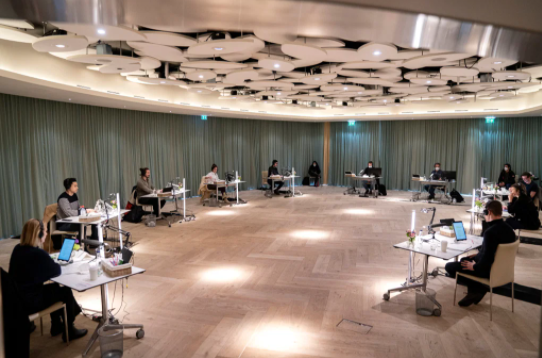 But that is not all we have to offer. Some major players have also been fitted with costume & make-up to present a first-time look at their characters. Take a peek and register a first impression. First is Emma D’Arcy and Matt Smith. D’Arcy wanders in from Wanderlust and Truth Seekers and, of course, we know Smith as a Dr. Who and Prince Philip. They both are now Dragonriders!

Next to cut a profile is Steve Toussaint who has done quite a bit of British telly and has been seen in HBO Max’ IT’S A SIN. Now he is a Lord of the high seas surrounding Westeros!

Another striking pair the one personified by Olivia Cooke and Rhys Ifans. Cooke was just in Sound of Metal but was also in Bates Motel. We know Ifans from Berlin Station or perhaps you recall him from Elementary. Now he and his co-star won’t be forgotten as Hightowers!

There will be plenty of more glimpses from the series to gawk at as the year goes on, we’re sure. Though we are aware that there are those cautious of this prequel to unspool, there are still loyal fans eagerly awaiting the opportunity to peek into the HOUSE OF THE DRAGON come 2022. HBOWatch is there for you.