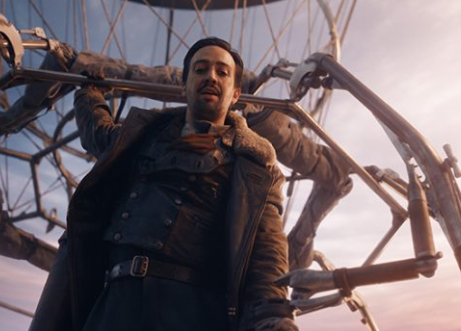 Episode 4 of His Dark Materials is very much about transition. When “Armour” begins, the Gyptians have reached the port town of Trollesund. Gliding high above them in the clouds, we meet a new character, Texan Aeronaut Lee Scoresby (played by Lin-Manuel Miranda), riding in a balloon with his daemon Hester (Cristela Alonzo), in search of his old friend, armored bear Iorek Byrnison. At some point in the past, Iorek had saved Lee’s life, and Lee is determined to find the bear and repay the debt he owes. He has heard that Iorek is in Trollesund, but the locals are uninterested in producing the bear, and Lee soon finds his questions answered with outright antagonism. Lee, not exactly an upstanding citizen, takes this as an opportunity to steal some loot.

Meanwhile, the Gyptians arrange a meeting with a representative of the Witches, Dr. Lanselius (Omid Djalili). Though they are able to secure the help of Farder Coram’s long-ago love, witch Serafina Pekkala, they are warned that other witch clans may side with the Gobblers. After proving her growing mastery of the alethiometer for Dr. Lanselius, Lyra is advised by him to seek the help of an armored bear, as the Gyptians will need to build their strength before they take on the Gobblers. Enter Iorek Byrnison (played by Joe Tandberg). Iorek is being kept as an almost slave by the townspeople of Trollesund (with the active encouragement of The Magisterium). The villagers stole his armor, which is as necessary to him as a daemon is to humans in Lyra’s world. Thus he is wasting away, doing metalwork for the villagers in exchange for scraps, when a bear of his grandeur should be shining on the battlefield. Lyra knows she needs the aid of the bitter, angry bear, and the key to helping the bear lies in aligning herself with Lee Scoresby.

It is important to note that “Armour” delivers a WHOLE LOT of exposition for viewers who are unfamiliar with the source material. I watch the series with someone who hasn’t read the books, and there were moments when she was having trouble keeping up with all the new information. This moment in the books also became a problem for the feature film, and now for the TV series. While we were in Jordan College, or in London, the world that Lyra inhabited was immediately recognizable to us. Sure, there were daemons and balloons, but the fantasy elements were small and barely called attention to themselves. Iorek, on 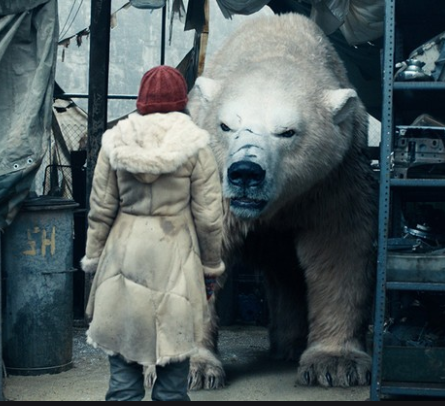 the other hand, is a literal giant helping of fantasy. It isn’t enough that he’s big; it isn’t enough that he’s a bear; it isn’t enough that he talks; it isn’t enough that he builds things; he’s a supreme fighter and the ousted king of his people. That he is introduced in Trollesund makes the transition into high fantasy more abrupt, as Lyra is suddenly surrounded by creatures (witches, bears) and places she has never seen. The problem is, the book and the show aren’t about Iorek, yet he is featured on the cover of several editions of Northern Lights/The Golden Compass. Here, the entire episode is devoted to discussing his armor, and if the story proceeds as it does in the book, we’re going to see a lot of him. I understand that Iorek is a beloved character, and beautiful looking one at that, but I re-iterate: the series is not about him. For newbies, Iorek may prove too much to accept. If they stick around, however, they will see that the story returns its focus to the central three characters (and most dysfunctional of families): Lyra, Mrs.Coulter, and Lord Asriel.

Speaking of Lord Asriel, we learn in “Armour” that Mrs. Coulter has enlisted the help of the panserbjørne (the armored bears) to capture and jail Lord Asriel. We haven’t seen Asriel since Episode 1. The TV series has done away with one of the most frustrating things about the books: being confined to Lyra’s point-of-view. Thus viewers are able to see what Mrs. Coulter is doing, and Boreal, and the Magisterium. It has introduced viewers to several facts that readers didn’t learn until the second book, particularly about the ability to travel between worlds. Some of these changes and revelations are more effective than others. The added scenes with Mrs. Coulter and the Magisterium, as well as her later scene with the armored bear Iofur Raknison were great moments, not only in terms of exposition but 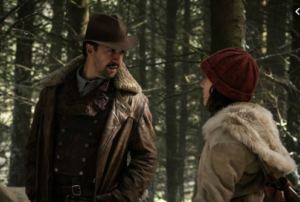 in the characterization of Marissa Coulter.The change in Lee Scoreby’s character from the book’s Texan cowboy-type to a Western charlatan/thief is delightful, and played with great charm (I love his conversations with Hester). We are also able to see a lot more of him because we as viewers are not always with Lyra. The scenes with Boreal are more problematic, as they are a lot less clear. I believe viewers will have some clarity soon, but Boreal’s activities may have been introduced too soon. What is surprising is that the series has not yet used its omniscient freedom to take us to Lord Asriel, my personal favorite of all the characters in Pullman’s books. It would have been interesting to see his storyline during this time. Perhaps we’ll see him soon now that his whereabouts have been revealed.

In terms of narrative arc, “Armour” accomplished a lot: Lyra enlisted two new allies and secured the future help of another (Serafina). Nevertheless, it felt more inert than previous episodes. I didn’t feel the suspense here that I felt when Lyra was crawling inside Mrs. Coulter’s vents. Such is the nature of transitional expository chapters, however, and I expect that momentum and suspense will return now that the ragtag team of allies is in place, their sights set on The Oblation Board’s center of operations, officially called The Station, but known to locals as Bolvangar, “the fields of evil.”

Here is a look at what is coming up next: